Trousdale County, also known as Hartsville/Trousdale County, is a county located in the U.S. state of Tennessee. As of the 2010 census, the population was 7,870. Its county seat is Hartsville, with which it shares a uniquely formed consolidated city-county government. With an area of just 117 square miles (300 km2), it is Tennessee's smallest county.

Trousdale County is part of the Nashville-Davidson–Murfreesboro–Franklin, TN Metropolitan Statistical Area, although it is located just beyond the ring of "bedroom communities" in the Nashville metropolitan area. Farming and livestock-raising characterize this largely rural area.

Hartsville is the county seat of Trousdale County and now coextensive with it as a metropolitan government by virtue of a referendum which passed in Trousdale County by a single vote. Trousdale County High School is located here, as well as a technical school operated by the Tennessee Board of Regents. Trousdale County is one of two counties in Tennessee to have legalized parimutuel betting on horse racing, but no group has ever stepped forward to build a racetrack.

Trousdale County was formed in 1870 from parts of Macon, Smith, Sumner and Wilson counties. It was named for William Trousdale (1790–1872), Brigadier General in the Mexican War, Governor of Tennessee, 1849–1851, and U.S. Minister to Brazil, 1853–1857. Hartsvillians had initially sought the creation of their own, separate county in 1849, but the effort failed. 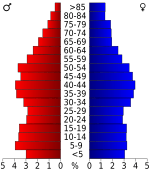 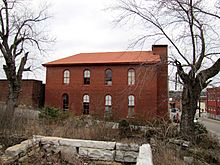 Hartsville, the county seat, is the only officially constituted municipality in Trousdale County. Unincorporated communities include:

All content from Kiddle encyclopedia articles (including the article images and facts) can be freely used under Attribution-ShareAlike license, unless stated otherwise. Cite this article:
Trousdale County, Tennessee Facts for Kids. Kiddle Encyclopedia.