Portland is located on the Highland Rim in extreme northern Middle Tennessee. This region has always been known for excellent agricultural soils, a spectacular wildlife environment and an enjoyable climate.

People were originally attracted from the tobacco belt in Virginia and the Carolina to the Highland Rim for land speculation and dark tobacco. The Highland Rim offered ideal climate and soil conditions for growing dark tobacco. This lucrative crop increased the value of the land which benefited land speculators in the area. Eventually these speculators moved on to attempt profits elsewhere. The farmers however, remained.

The oldest local settlement in Portland is Fountain Head which is located a couple of miles south of Portland. This settlement was founded 1792 by the James Gwin family. Within a century, it grew to include a mill, tobacco factory, post office, Louisville & Nashville railroad depot and a number of local retail stores.

William Nolan built a school near Shun Pike in what is now Portland. This caused the community to grow. Portland was originally called Richland. In 1859, the L&N Railroad opened the Nashville-Bowling Green route through Portland. In the same year, a train depot was built in Richland along the railroad in on property owned by Thomas Buntin. Buntin became the depot’s first agent and later became Richland’s first postmaster. Without this depot, the City of Portland would likely not exist. The community grew around the depot. Even today, the railroad runs directly through the center of town. The first public high school in Sumner county was originally started as a seminary in 1874. It was later named Sumner County High school and opened in 1915.

In 1887, there were two towns by the name of Richland in Tennessee. This caused concern for the L&N railroad. They worried that a telegraph mix-up might result in a train wreck. It also became an extreme inconvenience to postal customers since the mail was frequently misdirected between the two Richlands. It was later decided by the Railroad administrators and the postal authorities that Richland would be renamed Portland to avoid this confusion. The new name was taken into effect on April 10, 1888. Portland was incorporated in April 1904 by legislation passed by the Tennessee Assembly.

Currently Portland is growing at a fast pace due to being part of the fast growing Nashville Metropolitan Area, leading to companies such as Daido America operating their US headquarters in Portland, along with companies such as Kyowa America and Unipres having manufacturing plants in the city as well.

Portland is the strawberry capital of Tennessee. 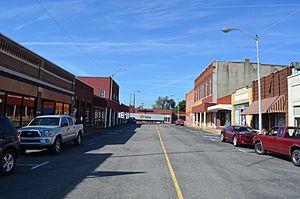 All content from Kiddle encyclopedia articles (including the article images and facts) can be freely used under Attribution-ShareAlike license, unless stated otherwise. Cite this article:
Portland, Tennessee Facts for Kids. Kiddle Encyclopedia.