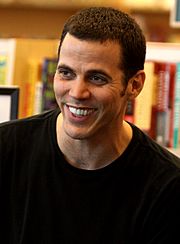 Steve-O (born Stephen Gilchrist Glover; June 13, 1974) is a British-Canadian-American stunt performer, comedian, actor, and TV personality. He is known for being one of the cast members of Jackass.

Steve-O was born on June 13, 1974 in London, England to a Canadian mother and to an American father. He was raised in Darien, Connecticut and in Miami, Florida. Steve-O studied at the University of Miami and at the Ringling Brothers and Barnum & Bailey Clown College. He was in rehab several times.

All content from Kiddle encyclopedia articles (including the article images and facts) can be freely used under Attribution-ShareAlike license, unless stated otherwise. Cite this article:
Steve-O Facts for Kids. Kiddle Encyclopedia.