Mount Juliet (more commonly known as Mt. Juliet) is a city located in western Wilson County, Tennessee. A suburb of Nashville, it is approximately 17 miles (27 km) east of downtown Nashville. Mt. Juliet is located mostly between two major national east-west routes, Interstate 40 and U.S. Route 70. As of the 2015 special census, the city has a total population of 28,156. Mt. Juliet is the largest city in Wilson County

Mt. Juliet was formed in 1835 and incorporated as a city in 1972. According to the Mt. Juliet Chamber of Commerce, the name of the town has two possible explanations. One theory is that the town was named for Julia Gleaves, a person who was renowned for taking care of those in need within the community. The most widely accepted story is that Mt. Juliet is named for the Mount Juliet Estate, a manor house in County Kilkenny, Ireland. It is the only U.S. city with this name. 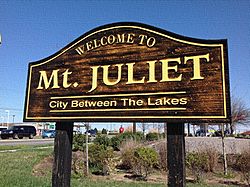 According to the United States Census Bureau, the city has a total area of 16.6 square miles (43 km2), of which 16.2 square miles (42 km2) is land and 0.3 square miles (0.78 km2) is water. The total area is 1.99% water. Recent annexations along the east side of South Rutland Road as well as a land swap with the City of Lebanon for the Bel Air at Beckwith project (southeast quadrant of I-40/Beckwith Road interchange) have increased the city's geographical area to approximately 21.78 square miles (56.4 km2).

Mt. Juliet's official city slogan is "The City Between The Lakes", reflecting the city's proximity to Old Hickory Lake (Cumberland River) to its north and Percy Priest Lake (Stones River) to its south, both of which are man-made reservoirs. 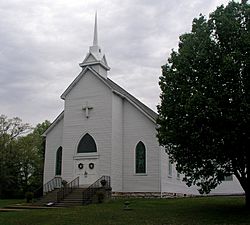 Dating back to the mid-1800s Cook's United Methodist Church is one of the oldest churches in Mt. Juliet

There were 4,341 households out of which 46.0% had children under the age of 18 living with them, 67.3% were married couples living together, 11.2% had a female householder with no husband present, and 17.6% were non-families. Thirteen-point-eight percent of all households were made up of individuals and 3.3% had someone living alone who was 65 years of age or older. The average household size was 2.82 and the average family size was 3.12.

Mt. Juliet has claimed to be the "fastest-growing city in Tennessee," and it does qualify for this distinction if one considers growth from 2000–2015 for Tennessee cities with a population over 10,000. In recent years, Thompsons Station in Williamson County and Spring Hill in Williamson County have grown by a larger percentage basis. Mt. Juliet remains one of the fastest growing places in Tennessee.

Interstate 40 and U.S. Route 70 (Lebanon Road) run east/west through Mt. Juliet, and State Route 171 (Mt Juliet Road) runs north-to-south connecting US-70 to I-40, before continuing toward Interstate 24 in the Antioch area. 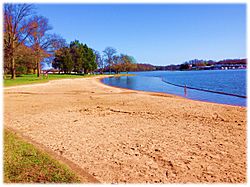 Three state parks are located within a 30-minute drive of the city:

Fishing and boating are popular pastimes in Mt. Juliet, resultant of the city's proximity to Percy Priest and Old Hickory Lakes. 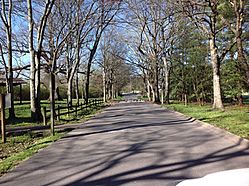 Swimming is an up-and-coming sport in Mt. Juliet and West Wilson County. Two summer league teams exist: one at Langford Farms and the other at Willoughby Station.

The City of Mt. Juliet operates a police department. Ambulance service are provided by WEMA (the Wilson Emergency Management Agency). The city has a combination career and volunteer Fire Department (MJFD) with one station on Belinda Parkway and another station located on Hill Street. MJPD is currently in discussions to open a third fire station on the north side of Mt. Juliet. There is one WEMA fire station also within the city limits. Mt. Juliet has a new police station near Charlie Daniels Park on the city's northwest side. In December 2008, the Mt. Juliet Police Department Animal Control Division opened a shelter on Industrial Drive.

All content from Kiddle encyclopedia articles (including the article images and facts) can be freely used under Attribution-ShareAlike license, unless stated otherwise. Cite this article:
Mount Juliet, Tennessee Facts for Kids. Kiddle Encyclopedia.