Hamilton County is a county located in the U.S. state of Tennessee. As of the 2010 census, the population was 336,463, making it the fourth-most populous county in Tennessee. Its county seat is Chattanooga. The county was named for Alexander Hamilton, the first Secretary of the Treasury.

Hamilton County was formed on October 25, 1819 from portions of Rhea County and Indian land. It was named after Alexander Hamilton, an officer in the American Revolutionary War, member of the Continental Congress, the first US Secretary of Treasury, and one of the founding fathers of the United States.

Hamilton County was the site of an important saltpeter mine during the Civil War. Saltpeter is the main ingredient of gunpowder and was obtained by leaching the earth from caves. Lookout Mountain Cave was a major source of saltpeter during the Civil War. The mine was operated by Robert Cravens, who owned the property where the cave is located. In May 1861, Cravens contracted with the Tennessee Military and Financial Board to deliver 20,000 pounds of saltpeter. On the 24th of the same month, he reported that he had ten hoppers already set up in his cave. Cravens was also mining Nickajack Cave in nearby Marion County. In 1862 he quit mining at Lookout Mountain Cave and rented the cave to the Confederate Nitre and Mining Bureau, which mined the cave from June 1862 through July 1863. Mining ceased when Chattanooga was occupied by Federal forces in 1863.

In 1919 James County, Tennessee went bankrupt and became a part of Hamilton County in April 1919. James County had been established by the Tennessee General Assembly in January 1871 and was named after Reverend Jesse J. James.

Raccoon Mountain Caverns is a show cave located 8 miles northwest of downtown Chattanooga. It was originally explored in 1929 by Leo Lambert who developed trails and installed lights and opened the cave to the public on June 28, 1931. The cave was opened under the name Tennessee Caverns. The operators of the cave claim that its explored length is over 5.5 miles.

The Crystal Caverns Cave Spider, Nesticus furtivus, is only known from this one cave. Cave guides will occasionally spot one of these rare spiders and point it out to the tourists. 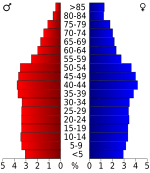 All content from Kiddle encyclopedia articles (including the article images and facts) can be freely used under Attribution-ShareAlike license, unless stated otherwise. Cite this article:
Hamilton County, Tennessee Facts for Kids. Kiddle Encyclopedia.