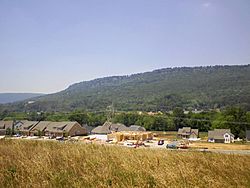 According to the United States Census Bureau, the town has a total area of 6.7 square miles (17.3 km2), all land.

Signal Mountain's history dates back years before settlement of the mountain itself. Centuries prior to the Civil War, Native Americans used a location on the mountain known as Signal Point to send fire and smoke signals across the Tennessee Valley. Later, the Union Army used Signal Point as a communications station during the American Civil War. At the outbreak of the war, only a few families lived on the mountain. However, when various health epidemics struck Chattanooga in 1873 and 1878, several wealthy families relocated to the mountain where they could find clear air and pure water. In the early 20th century, Charles E. James purchased 4,400 acres (18 km2) of land in the Signal Point area and developed the mountain. In 1913, construction was completed of twelve miles (19 km) of streetcar track, which linked Chattanooga to Signal Mountain. While the streetcars are no longer used, the tracks remain in the streets of Signal Mountain's historic district named after Velma. On April 4, 1919, the Tennessee Legislature passed the bill that chartered the Town of Signal Mountain. During the 1970s, the town experienced significant growth. In 2013 Signal Mountain made Bloomberg Businessweeks' list of the best places to raise a family.

There were 2,960 households, of which 33.4% had children under the age of 18 living with them, 65.3% were married couples living together, 6.2% had a female householder with no husband present, and 26.5% were non-families. 25.1% of all households were made up of individuals and 17.2% had someone living alone who was 65 years of age or older. The average household size was 2.51 and the average family size was 3.01.

Signal Mountain is home to a number of outdoors attractions including the Cumberland Trail, Mabbitt Springs, and Signal Point, which is a U.S. National Park. Visitors and citizens have many different locations where they can hike and backpack, such as Rainbow Lake and Edward's Point. [1]

The Signal Mountain Playhouse presents two plays per year including an outdoor musical every summer in the natural amphitheatre behind the Town Hall. The MACC (Mountain Arts Community Center), located in the historic Signal Mountain Elementary School building, offers classes in music, dance, and visual arts. The town of Walden, on Signal Mountain, hosts an outdoor public playground and pavilion called the Pumpkin Patch that is open for all to enjoy. Also, Bachman Community Center has many annual events as well as a small library and community garden plots. Additionally, the Mountain Opry hosts a weekly bluegrass music show every Friday evening.

All content from Kiddle encyclopedia articles (including the article images and facts) can be freely used under Attribution-ShareAlike license, unless stated otherwise. Cite this article:
Signal Mountain, Tennessee Facts for Kids. Kiddle Encyclopedia.