Dunlap is part of the Chattanooga, TN–GA Metropolitan Statistical Area.

Dunlap was founded in 1858 as a county seat for Sequatchie County, which had been created the previous year. The city was named for state legislator William Dunlap, who played a prominent role in the county's creation. The city's initial 40 acres (0.16 km2), which were deeded to the county commissioners by Willam Rankin, were chosen due to their central location within the new county. Dunlap was incorporated as a city in 1941.

Around 1900, the Douglas Coal and Coke Company purchased 14,000 acres (57 km2) of land in the Dunlap vicinity with plans to mine coal and convert the coal into industrial coke. Coke, which is created by heating coal and removing its volatile matter, is used primarily as a deoxidizing agent in the production of pig iron. To convert coal mined on nearby Fredonia Mountain into coke, Douglas built the first of 268 ovens. The company used an incline railway to move the coal from the mountain to the ovens. Although Douglas went bankrupt in 1904, the Chattanooga Iron and Coal Company purchased the ovens, and continued producing coke until 1927. In the 1980s and 1990s, the Sequatchie Valley Historical Association acquired the ruins of the coke ovens and established Dunlap Coke Ovens Park.

U.S. Route 127 (called "Rankin Avenue" in Dunlap), which traverses much of the Tennessee section of Sequatchie Valley, connects Dunlap to Pikeville and Crossville to the north and Chattanooga opposite Signal Mountain to the southeast. S.R. 28, which intersects with U.S. 127 in Dunlap, connects the city to Jasper to the southwest. S.R. 111, which intersects US 127 a few miles north of Dunlap, connects the city to Chattanooga to the southeast and Spencer atop the plateau to the west.

According to the United States Census Bureau, the city has a total area of 8.6 square miles (22 km2), all land. 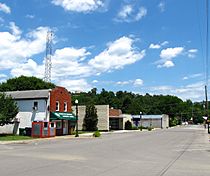 Several annual festivals, including a bluegrass festival, are held at the Dunlap Coke Ovens Park every year. Dunlap is often referred to as the "Hang Gliding Capital of the East" and is home to the East Coast Hang Gliding Championships and a hang gliding organization known as the Tennessee Tree Toppers. The Mount Airy Golf Course is located just north of the city at the Sequatchie-Bledsoe county line. Savage Gulf State Natural Area is located atop the Cumberland Plateau to the west and Prentice Cooper State Forest is located atop the plateau to the east.

All content from Kiddle encyclopedia articles (including the article images and facts) can be freely used under Attribution-ShareAlike license, unless stated otherwise. Cite this article:
Dunlap, Tennessee Facts for Kids. Kiddle Encyclopedia.