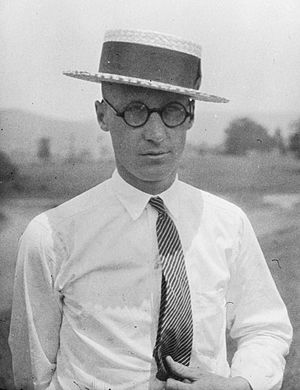 The teacher at the center of proceedings, John Thomas Scopes

The Scopes trial is formally known as The State of Tennessee v. John Thomas Scopes. It is also referred to as the Scopes monkey trial.

It was a famous American legal case in 1925. A substitute high school teacher, John Scopes, was accused of violating Tennessee's Butler Act. This Act made it unlawful to teach human evolution in any state-funded school. The trial was deliberately staged in order to attract publicity to the small town of Dayton, Tennessee, where it was held.

Scopes was unsure whether he had ever actually taught evolution, but he purposely incriminated himself so that the case could have a defendant.

Scopes was found guilty and fined $100, but the verdict was overturned on a technicality. The trial served its purpose of drawing intense national publicity. National reporters came to Dayton to cover the big-name lawyers who had agreed to represent each side. William Jennings Bryan, three-time presidential candidate, argued for the prosecution, while Clarence Darrow, the famed defense attorney, spoke for Scopes.

The trial publicized the Fundamentalist–Modernist Controversy. This set "Modernists", who said evolution was not inconsistent with religion, against Fundamentalists, who said the word of God as revealed in the Bible took priority over all human knowledge. The case was thus seen as both a theological contest and a trial on whether modern evolutionary biology should be taught in schools.

The Tennessee law was not repealed until 1967.

All content from Kiddle encyclopedia articles (including the article images and facts) can be freely used under Attribution-ShareAlike license, unless stated otherwise. Cite this article:
Scopes trial Facts for Kids. Kiddle Encyclopedia.