Sequatchie County is a county located in the U.S. state of Tennessee. As of the 2010 census, the population was 14,112. Its county seat is Dunlap.

Sequatchie County was created in 1857 from a portion of Hamilton County. It was named for the Sequatchie Valley, which in turn had been named for a Cherokee chief. The word sequachee in Cherokee means, "opossum" or "he grins or runs." Settlers began arriving in what is now Sequatchie by the early 19th century, drawn to the area by the fertile land in the valley.

At the outset of the Civil War, Sequatchie was divided over the issue of secession. On June 8, 1861, Sequatchie Countians voted in favor of Tennessee's Ordinance of Secession by a vote 153 to 100. In October 1863, Confederate General Joseph Wheeler led a raid into Sequatchie, burning nearly a thousand wagons and capturing livestock.

During the late 19th century, the Douglas Coal and Coke Company (later the Chattanooga Iron and Coal Corporation) conducted extensive mining activities in the Dunlap area. The company constructed 268 beehive ovens, now known as the Dunlap Coke Ovens, to convert coal into coke. The ovens are now the focus of a local park.

View over Sequatchie County from an overlook off TN-111

Sequatchie is one of three counties (along with Bledsoe and Marion) situated in the Sequatchie Valley, a long, narrow valley running northeast-to-southwest across the eastern portion of the Cumberland Plateau. The county is flanked by the Plateau's Walden Ridge escarpment on the east. The Sequatchie River, which spans the valley, passes through the county. 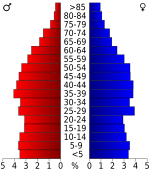 Sequatchie County is known as "The Hang Gliding Capital of the East", due in part to the presence of an active hang gliding association, the Tennessee Tree Toppers. This group maintains a hang gliding ramp at Henson's Gap, along the eastern wall of the Sequatchie Valley, where favorable flying conditions allow these unpowered aircraft to fly well into northwestern Georgia and northeastern Alabama after launch. The gap is the site of numerous hang gliding competitions, is a popular tourist attraction for aficionodos of the sport from all over the world.

All content from Kiddle encyclopedia articles (including the article images and facts) can be freely used under Attribution-ShareAlike license, unless stated otherwise. Cite this article:
Sequatchie County, Tennessee Facts for Kids. Kiddle Encyclopedia.