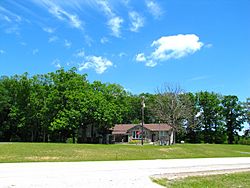 Cagle (also known as Cagle Mountain) is an unincorporated community in Sequatchie County, Tennessee, United States. It is concentrated around the intersection of Tennessee State Route 111 and Tennessee State Route 399 atop the Cumberland Plateau in the western part of the county. Its elevation is 2,106 feet (642 m). The Tennessee Valley Divide passes through the community.

Cagle is home to a community center, fire department, and several small businesses.

All content from Kiddle encyclopedia articles (including the article images and facts) can be freely used under Attribution-ShareAlike license, unless stated otherwise. Cite this article:
Cagle, Tennessee Facts for Kids. Kiddle Encyclopedia.