Marion County is a county located in the U.S. state of Tennessee. As of the 2010 census, the population was 28,237. Its county seat is Jasper.

Marion County was established in 1817 from lands acquired from the Cherokee.

In 1779 Cherokee chief Dragging Canoe moved down the Tennessee River from Chickamauga Creek to Running Water creek, and helped establish the associated town of Nickajack in front of the entrance to Nickajack Cave. In 1794, this town was attacked and burned. This attack was led by Colonel James Orr of Nashville, Tennessee. The town was rebuilt and the Chickamauga Band of Indians continued to live here until 1838, when all remaining Indians were removed from Tennessee, Alabama, and Georgia via the Trail of Tears.

Another important saltpeter mine during the Civil War was Monteagle Saltpeter Cave, located in Cave Cove, approximately 4 miles (6.4 km) southeast of Monteagle. During the Civil War, it was referred to as Battle Creek Cave. A 1917 visitor to the cave reported 25 or 30 old hoppers remaining in the cave.

In the late 19th and early 20th centuries, coal and iron ore mining industries dominated the county's economy. Mines operated in Whitwell and Inman, and smelters operated in South Pittsburg.

Hales Bar Dam, built along the Tennessee River in Marion County between 1905 and 1913, was one of the nation's first major dams constructed across a navigable channel. The Tennessee Valley Authority replaced Hales Bar with Nickajack Dam further downstream in the 1960s, though the Hales Bar powerhouse (now a boathouse) still stands. 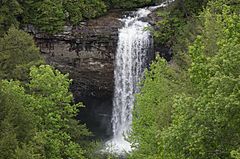 Foster Falls, at one end of the Fiery Gizzard Trail 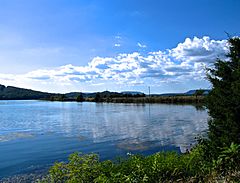 According to the U.S. Census Bureau, the county has a total area of 512 square miles (1,330 km2), of which 498 square miles (1,290 km2) is land and 14 square miles (36 km2) (2.8%) is water. Marion is one of three Tennessee counties, along with Bledsoe and Sequatchie, located in the Sequatchie Valley, a long, narrow valley slicing through the southeastern Cumberland Plateau. The Sequatchie River, which drains the valley, empties into the Tennessee River just south of Jasper.

Nickajack Dam is located along the Tennessee River near Jasper, creating Nickajack Lake. The section of the river immediately downstream from the dam is part of Guntersville Lake. The Raccoon Mountain Pumped-Storage Plant is located in the extreme southeastern part of the county. 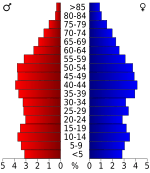 Nickajack Cave in Marion County, located 0.6 miles south of Shellmound Station on the west side of the Tennessee River, is one of the most historical caves in Tennessee. It is currently part of a park run by the city of New Hope. A paved hiking trail leads to an observation deck at the entrance to the cave where visitors can watch the bats leave the cave at dusk. The cave was used by tourists and as a show cave, but in 1968 the cave was flooded when Tennessee Valley Authority constructed Nickajack Dam 6 miles (9.7 km) downstream to replace the aging Hales Bar Dam. 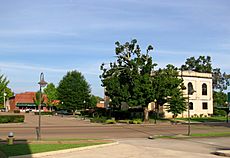 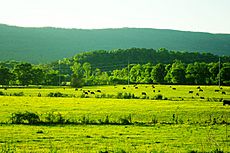 All content from Kiddle encyclopedia articles (including the article images and facts) can be freely used under Attribution-ShareAlike license, unless stated otherwise. Cite this article:
Marion County, Tennessee Facts for Kids. Kiddle Encyclopedia.