Monteagle is famous for the treacherous stretch of Interstate 24 that passes through the town. It is here that the highway passes over what is colloquially referred to as "The Monteagle" or "Monteagle Mountain", a section of the southern Cumberland Plateau which is a major landmark on the road between Chattanooga and Nashville. The interstate regularly shuts down in inclement weather, routing traffic onto U.S. Route 41. In the Jerry Reed song "The Legend", which is the opening track in the film Smokey and the Bandit, Reed tells the story of the Bandit miraculously surviving brake failure on the "Monteagle Grade". There is also a song called "Monteagle Mountain" by Johnny Cash on the album Boom Chicka Boom.

The town is home to DuBose Conference Center and the Monteagle Sunday School Assembly. The Highlander Folk School, long involved in the labor movement and the civil rights movement, was located here from 1932 to 1961. Rosa Parks attended workshops there shortly before the Montgomery Bus Boycott. 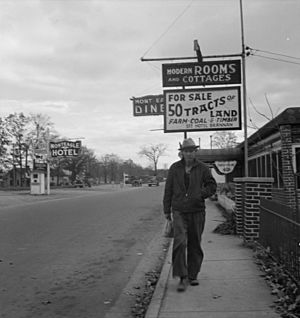 Monteagle has long served as a popular point to cross the Cumberland Plateau due to its location along a relatively narrow stretch of the plateau in southern Tennessee. One of the last groups of Cherokees removed from the Southeastern United States along the Trail of Tears passed through what is now Monteagle en route to Oklahoma in late October 1838. This group consisted of approximately 700 Cherokee led by John Bell and escorted by U.S. Army Lieutenant Edward Deas.

The town of Monteagle was originally known as "Moffat Station" after John Moffat, a Scottish-Canadian temperance activist who purchased over 1,000 acres (4.0 km2) of land in the area in 1870. In 1872, Moffat donated 50 acres (20 ha) of land to Fairmount College, a women's college that had decided to relocate to the area from Jackson, Mississippi. The grounds of the school are now home to the DuBose Conference Center, named for one of the school's early pastors. In 1882, the Chautauqua-inspired Monteagle Sunday School Assembly was established to train Sunday school teachers.

The name of Moffat Station was later changed to "Mount Eagle", and afterwards to "Mounteagle". The spelling had been changed to "Monteagle" by the time the town incorporated in 1962.

The town straddles a narrow stretch of the Cumberland Plateau known colloquially as "Monteagle Mountain". This stretch of the plateau is approximately 2 miles (3 km) wide, with steep drop-offs to the northwest and southeast. Monteagle lies at an elevation of just under 2,000 feet (610 m) above sea level. By comparison, two nearby cities, Cowan (to the northwest) and South Pittsburg (to the southeast), lie at elevations of less than 1,000 feet (300 m) above sea level.

According to the United States Census Bureau, the town has a total area of 8.6 square miles (22.3 km2), of which 8.5 square miles (22.1 km2) is land and 0.04 square miles (0.1 km2), or 0.48%, is water. The north side of town drains off the plateau into Layne Cove and is part of the Elk River watershed, while the south side drains into Ladd Cove and Cave Cove, part of the Battle Creek watershed. Both watersheds flow to the Tennessee River. 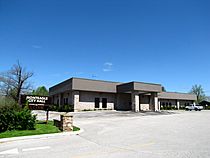 There were 477 households, out of which 26.0% had children under the age of 18 living with them, 49.3% were married couples living together, 15.5% had a female householder with no husband present, and 32.7% were non-families. 28.3% of all households were made up of individuals, and 14.9% had someone living alone who was 65 years of age or older. The average household size was 2.33 and the average family size was 2.85.

All content from Kiddle encyclopedia articles (including the article images and facts) can be freely used under Attribution-ShareAlike license, unless stated otherwise. Cite this article:
Monteagle, Tennessee Facts for Kids. Kiddle Encyclopedia.