Cowan is a city in Franklin County, Tennessee, United States. The population was 1,737 at the 2010 census. It is part of the Tullahoma, Tennessee Micropolitan Statistical Area.

The earliest settlers arrived in the Cowan area in the late 18th and early 19th centuries. The home of one such settler, William Russell, served as the Franklin County Courthouse until the establishment of Winchester in 1810. The town was named for Dr. James Benjamin Cowan, a Civil War-era doctor whose family had lived in the area since the early 1800s. 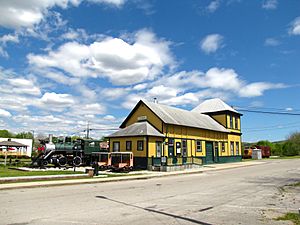 The town of Cowan dates from the mid-19th century and developed mostly as a railroad town. It was the site where several branch lines met the main Nashville to Chattanooga trunk of the Nashville, Chattanooga and St. Louis Railway which ran through the important Cowan Tunnel. As the last stop before the uphill climb onto the nearby Cumberland Plateau, pusher engines to assist trains in making the steep ascent were based there, and are still in use today.

The town's economy declined with the importance of the railroad after United States Highway 41A was built in the 1940s. The old passenger depot, built in 1904, was restored as a museum, and is a focal point of the downtown area.

US 41A (Cumberland Street) is the primary road in Cowan, connecting the city with Winchester and the Tims Ford Lake area to the west. To the east of Cowan, US 41A ascends nearly 1,000 feet (300 m) to the top of the Cumberland Plateau, where it passes through Sewanee and Monteagle. 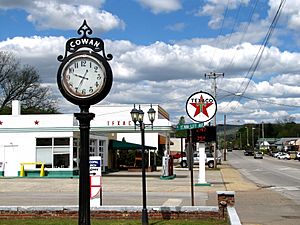 Street clock and Texaco station along US 41A in Cowan

There were 746 households, out of which 30.8% had children under the age of 18 living with them, 46.6% were married couples living together, 16.4% had a female householder with no husband present, and 33.0% were non-families. 31.4% of all households were made up of individuals, and 14.3% had someone living alone who was 65 years of age or older. The average household size was 2.36 and the average family size was 2.95.

All content from Kiddle encyclopedia articles (including the article images and facts) can be freely used under Attribution-ShareAlike license, unless stated otherwise. Cite this article:
Cowan, Tennessee Facts for Kids. Kiddle Encyclopedia.