Sewanee is a census-designated place (CDP) in Franklin County, Tennessee, United States. The population was 2,311 at the 2010 census. It is part of the Tullahoma, Tennessee Micropolitan Statistical Area.

Sewanee is best known as the home of The University of the South, commonly known as "Sewanee".

The primary road in Sewanee is a merged section of U.S. Route 41A and Tennessee State Route 56, which connects the community with Monteagle to the east. In the western part of Sewanee, the two highways diverge, with US-41A descending the Plateau to the west and continuing toward Cowan and Winchester, and TN-56 descending the Plateau to the south and continuing toward Sherwood and Alabama.

The University of the South campus occupies most of the northern portion of Sewanee, with several small neighborhoods scattered around it. A small commercial district is concentrated around the intersection of US-41A and University Avenue, the latter being a wide road that connects the highway with the university campus. 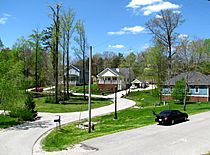 There were 494 households, out of which 24.9% had children under the age of 18 living with them, 52.8% were married couples living together, 7.3% had a female householder with no husband present, and 38.7% were non-families. 34.6% of all households were made up of individuals, and 13.8% had someone living alone who was 65 years of age or older. The average household size was 2.15 and the average family size was 2.76.

Sewanee is the home of The University of the South, founded and owned by the southern dioceses of the Episcopal Church, and generally known as "Sewanee."

The university hosts the Sewanee Writers' Conference each summer. The Sewanee Summer Music Festival is an annual, month-long music camp for young orchestral musicians under the tutelage of accomplished teachers and conductors.

Nearby St. Andrew's-Sewanee School, one of the oldest boarding-day schools in the South, is a private school for grades 6 through 12 with a student population of 100 boarding and 150 day students.

The Sewanee Review, a literary magazine, has been published in Sewanee continuously since 1892.

The Templeton Library, which was to be the repository of the papers of financier Sir John Templeton, a native of the area, sits prominently on a bluff of the plateau, overlooking the valley below. It is no longer a library, it now houses several private apartments.

All content from Kiddle encyclopedia articles (including the article images and facts) can be freely used under Attribution-ShareAlike license, unless stated otherwise. Cite this article:
Sewanee, Tennessee Facts for Kids. Kiddle Encyclopedia.