Kids Encyclopedia Facts
Not to be confused with Franklin, Tennessee.

Franklin County is a county located in the U.S. state of Tennessee. As of the 2010 census, the population was 41,052. Its county seat is Winchester.

Euro-American settlement began around 1800, and the county was formally organized in 1807 and named for Benjamin Franklin. During the next several decades, the size of the county was reduced several times by reorganizations which created the neighboring counties of Coffee County, Moore County, and Grundy County. One of the most notable early settlers was frontiersman Davy Crockett, who came about 1812 but is not thought to have remained long.

The University of the South, founded by the Episcopal Church, was organized just before the Civil War. It began full operations shortly after hostilities ceased. It encompasses a full university and theological seminary. The University of Tennessee Space Institute is also located in the county.

The area became strongly secessionist before the war. Franklin County formally threatened to secede from Tennessee and join Alabama if Tennessee did not leave the union, which it shortly did. This contrasted sharply with the situation in nearby Winston County, Alabama, which was pro-Union and discussed seceding from Alabama. The two illustrate the often divided and confused state of loyalties in the central South during this period.

During 1863, the Army of Tennessee retreated through the county, leaving it to Union control thereafter. Isham G. Harris, Confederate governor of Tennessee, was from Franklin County. After being restored to political rights after the war, he was elected to represent the state in the United States Senate.

During the temperance (anti-liquor) agitations of the late 19th century, residents discovered that by a quirk of state law, liquor could be sold only in incorporated towns. As a consequence, all of the county's towns abolished their charters in order to prohibit liquor sales.

In the 20th century, Franklin County benefited from the flood control and power generation activities of the Tennessee Valley Authority (TVA), built by the President Franklin D. Roosevelt administration during the Great Depression. The TVA helped bring new industry to the area. It also created opportunities for water recreation by making new lakes, but many county residents were displaced from their homes in the massive public works project. The establishment of the federal Arnold Engineering Development Center, which lies partly in the county, also helped spur economic growth and technical development. Although the interstate highway system barely touched the county, it did provide valuable access via Interstate 24 to nearby Chattanooga.

Two notable figures who were born in the county early in the twentieth century were singer/entertainer Dinah Shore and entrepreneur/philanthropist John Templeton. He later became a British subject and was awarded a knighthood.

During the last decades of the 19th and the first of the 20th, Tennessee, like other southern states, passed laws and constitutional amendments establishing Jim Crow: racial segregation in public facilities, restrictions of voting for blacks, and similar measures. There were few violent disturbances compared to many localities, but it was not until the mid-1960s, a decade after the historic Brown v. Board of Education court decision, that the county's schools were desegregated in 1964 after a lawsuit was won in Sewanee, Tennessee.

Considerable industrial growth occurred in the county in the last decades of the 20th century, including the construction of a large automobile engine plant by the Nissan corporation in Decherd. An emphasis on tourism also developed, based on Civil War history and local scenic attractions such as the dogwood forests, for which an annual festival is held.

US 41A approaching the Cumberland Plateau near Cowan 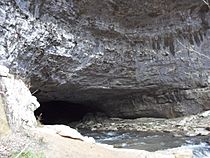 Franklin is one of Tennessee's southern tier of counties and abuts the Alabama border. It has a varied geography, extending from the southeast corner of the Nashville Basin over the Highland Rim and up onto the Cumberland Plateau, for a difference in elevation of about 1,300 feet (400 m). The county is well watered and forested, and except for the steeper areas of the plateau is well suited for agriculture, having a long growing season and mild winters.

Lost Cove Cave, located near Sherwood, is in the Carter State Natural Area. One of its entrances is known as the Buggytop Cave Entrance and another entrance is known as the Peter Cave Entrance. The Buggytop Entrance is 100 feet (30 m) wide and 80 feet (24 m) high and opens at the base of an overhanging bluff 150 feet (46 m) high. The cave stream cascades down from the mouth and drops 40 feet (12 m) in less than 100 yards (91 m). 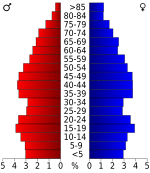 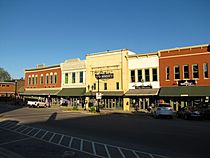 All content from Kiddle encyclopedia articles (including the article images and facts) can be freely used under Attribution-ShareAlike license, unless stated otherwise. Cite this article:
Franklin County, Tennessee Facts for Kids. Kiddle Encyclopedia.