Moore County is a county located in the U.S. state of Tennessee. As of the 2010 census, the population was 6,362, making it the third-least populous county in Tennessee. It forms a consolidated city-county government with its county seat of Lynchburg. With 130 square miles (340 km2), it is the second-smallest county in Tennessee, behind only Trousdale. The county was created in 1871.

Moore County was established in 1871 from parts of Lincoln, Bedford and Franklin counties, and named in honor of General William Moore, an early settler and long-time member of the state legislature. The new county originally contained about 300 square miles, but Lincoln County sued and successfully reclaimed a portion of its land, reducing the new county's size.

Moore County has been home to whiskey distilleries since the 1820s. By 1875, fifteen distilleries were operating in the county. At the end of the 20th century, the Jack Daniel Distillery in Lynchburg was the county's primary source of revenue.

According to the U.S. Census Bureau, the county has a total area of 130 square miles (340 km2), of which 129 square miles (330 km2) is land and 1.2 square miles (3.1 km2) (0.9%) is water. It is the second-smallest county in Tennessee by area. The county is located partially on the rugged Highland Rim, and partially in the flatter Nashville Basin. 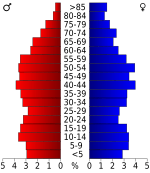 There were 2,492 households out of which 27% had children under the age of 18 living with them, 61.8% were married couples living together, 8.1% had a female householder with no husband present, and 26.1% were non-families. 22.6% of all households were made up of individuals and 11.0% had someone living alone who was 65 years of age or older, male or female. The average household size was 2.51 and the average family size was 2.93.

All content from Kiddle encyclopedia articles (including the article images and facts) can be freely used under Attribution-ShareAlike license, unless stated otherwise. Cite this article:
Moore County, Tennessee Facts for Kids. Kiddle Encyclopedia.