Bedford County is a county located in the U.S. state of Tennessee. As of the 2010 census, the population was 45,058. Its county seat is Shelbyville.

The county was created in 1807 when the citizens of Rutherford County living south of the Duck River and the Stones River successfully petitioned the governor to split Rutherford County into two. The new county was named after American Revolutionary War officer Thomas Bedford, who was a large landowner in the area. Once the state's largest and most populous county, Bedford County's size (in terms of area) has been steadily reduced since 1809. The county was pro-Confederate during the Civil War, but Shelbyville was mostly loyal to the Union. 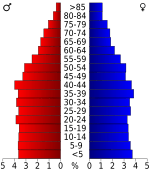 All content from Kiddle encyclopedia articles (including the article images and facts) can be freely used under Attribution-ShareAlike license, unless stated otherwise. Cite this article:
Bedford County, Tennessee Facts for Kids. Kiddle Encyclopedia.