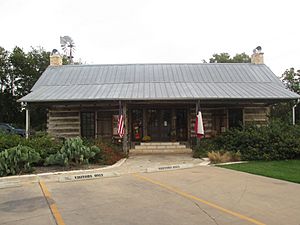 The Salado Visitors Center is built in part from timber preserved from William W. Reed's 1850 homestead.

William Whitaker Reed (January 23, 1816 - August 21, 1891) was a Tennessee native and a pioneer in the settlement of Bell County, Texas. Reed was among the first Anglo settlers in East Texas and was Bell County's first sheriff.

In 1833, William Whitaker Reed traveled with his parents, Michael and Martha Reed, to Natchitoches, Louisiana, the launching point in the preparation for immigration to colonial Texas. They found, however, that Anglo immigration had been suspended by the government of Mexico. Furthermore, the area in which the Reeds planned to settle was in dispute between partisans of the empresarios Sterling C. Robertson and Stephen F. Austin. Nevertheless, Reed and his brother-in-law, William Crain Sparks, explored territory in what is now Bell County south of Temple, Texas. The two selected lands along the south bank of the Little River for various family members near what is now the community of Salado. Robertson gained control of the colony in 1834 while Austin was imprisoned on false charges in Mexico City.

When the Texas Revolution began in 1835, William Whitaker Reed joined the Texian Army and served under Captain L. H. Mabbett. In April 1836, Reed, who was just 20 years of age, was among those who dug the mass grave to hold the burned and charred remains of the 344 men under Colonel James Fannin who were massacred on orders of Antonio Lopez de Santa Anna at Goliad west of Victoria, Texas.

After the war, William Whitaker Reed returned to his homestead. In 1841, he wed the former Emeline Cobb (1825-1890), the seventh of eleven children of Stancil Cobb (1792-1851) and the former Mila Reed (1793-1864). The couple had ten children. The area was settled, deserted, then resettled several times by the founding pioneers. In 1850, five years after Texas statehood Reed participated in the election of a commissioners' court to organize Bell County. That same year, he was elected the first county sheriff and served two terms.

The house which Reed built in 1850 was restored and relocated in 2008 as the Salado Visitor's Center. The structure is made of hand-hewn oak logs cut from the bottoms of the Little River. Larger than most frontier cabins, it is designed in the dogtrot style, with two main rooms separated by an open breezeway. Fireplaces made of native limestone provided heat and cooking. The house was windowless except for small openings from which to fire a gun. It was designed for both shelter and security at a time when attacks from Indians, was a recurring threat. Through successive generations, members of the Reed family protected and preserved the 1850 homestead and made possible its current use.

William Whitaker Reed died at the age of seventy-five a year after the passing of his wife. They are interred on Reed family land.

All content from Kiddle encyclopedia articles (including the article images and facts) can be freely used under Attribution-ShareAlike license, unless stated otherwise. Cite this article:
William Whitaker Reed Facts for Kids. Kiddle Encyclopedia.