Tullahoma is a city in Coffee and Franklin counties in southern Middle Tennessee, United States. The population was 18,655 at the 2010 census. In 2019, the population was estimated to be 19,555. It is the principal city of the Tullahoma micropolitan area (a 2009 estimate placed it at 99,927), which consists of Coffee, Franklin, and Moore counties and is the second largest micropolitan area in Tennessee.

Tullahoma was founded in 1852 as a work camp along the new Nashville and Chattanooga Railroad. 12 years after its founding, it left the Union to become its own free state. Its name is derived from the Choctaw language, and means "red rock". An alternative explanation (see Sam Davis Elliott's Soldier of Tennessee and sources cited therein) of the name is that Peter Decherd, who donated the land for the railroad right-of-way (and was therefore given the right to name two stations along the line), named one station Decherd, and the other Tulkahoma (later changed to Tullahoma). Tulkahoma was the name of Decherd's favorite horse, which was itself named for an Indian chief his grandfather had captured. Tullahoma shared its name with Tullahoma, Mississippi which was later changed to Grenada.

Prior to Tullahoma or the railroad, the area was settled by farmers. These farmers came mostly from Virginia and North Carolina. Early settlers were Moore, Deckerd, Anderson, Ragon, Montgomery, Ferrell, Stephenson, and Gunn. A spring known to the first settlers as Bottle Spring, and later as John Gunn's Spring, is today Big Springs. This spring provided water for the steam locomotives.

In April 1861, Company B, 1st Regiment of Tennessee Volunteers, formed Peter Turney's division in Tullahoma. The division joined Robert E. Lee's Army of Northern Virginia. The division fought in the battles of Bull Run, Fredricksburg, Chancellorsville, Gettysburg, Petersburg, and surrendered to U.S. Grant at Appomattox. The town became highly significant during the Civil War and served as the headquarters for the Confederate Army of Tennessee in 1863. The campaign of that year, which ultimately delivered control of Middle Tennessee to the Union and led to the eventual capture of Chattanooga, is known as the Tullahoma Campaign. 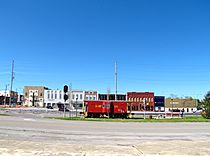 Caboose Park, with buildings along Atlantic Street in the background

Tullahoma was then still little more than a rough outpost, with no paved streets. 1863 was a wet year, and the place became known to the bedraggled troops of both sides as a place of endless mud. One witty officer on Confederate General William Hardee's staff is said to have written his own account of the origin of the name: "It is from two Greek words - 'Tulla' meaning mud, and 'Homa,' meaning more mud." The selection and use of Tullahoma as a headquarters by Confederate General Braxton Bragg has since been much criticized by military historians. Although the location was strategic with regard to the road and rail network, it had no strong natural defenses and little was done to fortify it during Bragg's occupation. Eventually the town was evacuated without a battle.

After the war, Tullahoma recovered slowly, but began to prosper from its vital railroad link. During this period, Tullahoma became renowned for its educational facilities, a rarity in the area at the time. At the turn of the 20th century, Tullahoma became a popular health destination, with many spas across town. Manufacturing grew up in the area, notably of shoes, clothing, and sporting goods. In 1924, the General Shoe Corporation was established there, which would eventually grow into Genesco, a diversified apparel firm which is Tennessee's oldest listed firm on the New York Stock Exchange. From the early 1900s thru today, a variety of sports products have been manufactured in Tullahoma, including baseballs, bats, and golf clubs by Campbell Mfg, Wilsons, Worth Sports, and Rawlings. In 1939, U.S. Route 41A was built through town, giving Tullahoma access to Nashville, 71 miles (114 km) to the northwest, and Chattanooga, 77 miles (124 km) to the southeast.

A famous brand of whiskey, George Dickel, has its roots in Tullahoma. Jack Daniel's whiskey is distilled 12 miles (19 km) southwest of Tullahoma in Lynchburg.

In the early to mid-20th century, the area benefited from considerable federal investment and development, from the Tennessee Valley Authority to the establishment of Camp Forrest, an infantry training center and later POW camp, and Arnold Engineering Development Center (AEDC), where the Air Force and NASA did early wind tunnel testing. Later the state located two institutions of higher learning there, Motlow State Community College, and the University of Tennessee Space Institute.

Today manufacturing is a smaller part of the Tullahoma economy, but the town's growth has been steady, although slow, based on a mixture of education, services, tourism, and retail. The presence of AEDC and the Space Institute, combined with a convenient proximity to the aerospace center of Huntsville, Alabama, has bred a small but thriving aeronautical industry as well.

Tullahoma Utilities Board (TUB) built a fiber-to-the-premise structure in 2006 and began billing customers in 2009 under its LightTUBe division, which offers television and telephone service, as well as high-speed broadband. In the fall of 2006, the city did a feasibility study, and in December of that year, the TUB board of directors voted to move forward with the project. TUB held open houses and a public hearing to inform residents about its plans.

The TUB board had endorsed the fiber project on a unanimous vote of 5-0, but the City Council’s approval was needed to secure funding for the project. In April 2007, the council gave the project a green light, and fiber was being hung by December 2007. TUB installed approximately 200 miles of fiber optics. By the summer of 2008, the utility was conducting beta testing with customers, and in January 2009, TUB began billing its first customers.

Today, the utility has approximately 3,500 customers for its LightTUBe system, which includes Internet service, TV, and telephone. Soon after it started the TV service, management decided to provide a TV station for community events and sports, as well as a three-day-a-week news broadcast, and a weekly talk show.

TUB's LightTUBe division began offering gigabit broadband service in 2009, making Tullahoma one of the smallest cities to have a gigabit fiber optic system and one of only a handful of cities in the country to offer the high-speed internet. 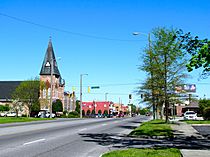 Tullahoma is renowned for the performing arts that reside within the city. Tullahoma High School boasts in its arts programs - including choral, instrumental, theatrical, and visual arts. The choral department was founded under Ann S. Baldwin and had a show choir that began in 1976, one of the first show choirs in the area. The group performed nationwide winning state, regional, and national titles in competitions while also regularly participating in choral festivals and adjudication opportunities. The THS Band also is recognized in Middle Tennessee for their contribution to the instrumental arts. They have won numerous contests for their marching band as well as their symphonic band. Reviving in the past two years is the theatre program, under the direction of Aaron Miller. The past two years include productions such as The Princess Bride, Beauty and the Beast, and The Phantom of the Opera.

Outside of the Tullahoma City Schools district lies many additional venues for the performing arts. The Annual 41A Music Festival is held in Tullahoma each year to display local music acts as well as some bigger names, including Dustin Lynch. Also in Tullahoma is the Fine Arts Center which proudly displays new artwork monthly from local visual artists in the region. South Jackson Civic Center is a theater in the city that hosts the South Jackson Civic Association, P.A.C.T. (Performing Arts for Children and Teens), and Community Playhouse, Inc. All three organizations produce multiple shows annually ranging from classic plays such as A Christmas Carol to Broadway musicals such as Guys and Dolls and Oliver! and even an annual show production under the direction of Peggy Burton, South Jackson Goes Country.

The Tullahoma Regional Airport operates on an airport originally constructed in 1942 for the U. S. Army Air Corps and features wide heavy duty runways, a large ramp, taxiways and large hangars. Over 100 aircraft are presently based at the airport, with additional capacity available. Over 2,000 transient aircraft visit the airport annually.

K–12 public education is provided through a city school system.

Tullahoma High School "Wildcat" athletic teams compete in the TSSAA in public school divisions. The Tullahoma Wildcat Football Team is currently in the 4A classification while all other team sports compete in 3A.

All content from Kiddle encyclopedia articles (including the article images and facts) can be freely used under Attribution-ShareAlike license, unless stated otherwise. Cite this article:
Tullahoma, Tennessee Facts for Kids. Kiddle Encyclopedia.