Kids Encyclopedia Facts
Not to be confused with Jackson, Alabama.

Jackson County is the northeasternmost county in the U.S. state of Alabama. As of the 2020 census, the population was 52,579. The county seat is Scottsboro. The county was named for Andrew Jackson, general in the United States Army and afterward President of the United States of America. Jackson County is a prohibition or dry county, but three cities within the county (Bridgeport, Scottsboro, and Stevenson) are "wet", allowing alcohol sales. Jackson County comprises the Scottsboro, AL Micropolitan Statistical Area. This is included in the Chattanooga-Cleveland-Dalton, TN-GA-AL Combined Statistical Area. It is the site of Russell Cave National Monument, an archeological site with evidence of 8,000 years of human occupation in the Southeast.

Jackson County was established on December 13, 1819. 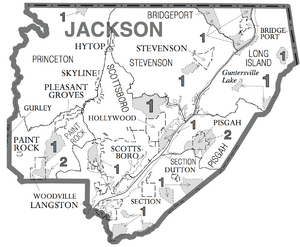 According to the 2010 United States Census: 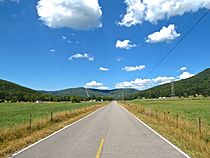 All content from Kiddle encyclopedia articles (including the article images and facts) can be freely used under Attribution-ShareAlike license, unless stated otherwise. Cite this article:
Jackson County, Alabama Facts for Kids. Kiddle Encyclopedia.