Bridgeport is a city in Jackson County, Alabama, United States. At the time of 2010 census the population was 2,418, down from 2,728 in 2000. Bridgeport is included in the Chattanooga-Cleveland-Dalton, TN-GA-AL Combined Statistical Area.

Bridgeport traces its origins to a riverboat landing established along the Tennessee River in the 1840s. This landing allowed local farmers to trade their crops for other goods. Within a few years, a small hamlet known as "Jonesville" had developed around the landing, and included a trading post, gristmill, warehouses, and several saloons. The Jonesville post office opened in 1852.

Fluctuating river levels made riverboat trade unreliable, and area merchants began campaigning for railroad access in the late 1840s. The first rail line reached Jonesville in 1852. A railroad bridge over the Tennessee River was completed in 1854, connecting the city with Chattanooga, Tennessee, and in recognition of this accomplishment, the name of the city was changed to "Bridgeport." Construction of a second rail line connecting Bridgeport with Jasper, Tennessee, to the north, began in 1860, but was not completed until after the Civil War. 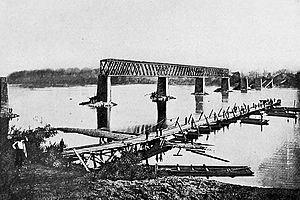 Because of its location on both a rail line and the Tennessee River, Bridgeport was a strategic site during the Civil War. The rail bridge at Bridgeport was among those targeted by the East Tennessee bridge-burning conspiracy in November 1861. Although this attempt failed, the bridge would be burned twice during the course of the war. Bridgeport was the site of a major skirmish on April 29, 1862, when Union General Ormsby Mitchel seized control of the city, and numerous other small actions over the following year as Confederate forces attempted to regain control of the area. The city was burned by Confederate troops under General Braxton Bragg in the Summer of 1863, but afterward reoccupied by Union forces. In the latter part of the war, Bridgeport was the site of a major shipyard building gunboats and transports for the Union Army. The USS Chattanooga was built here and became a vital part of the famous "Cracker Line," which broke the Confederates' siege of Chattanooga in November 1863.

In the early 1880s, brothers Frank and Walter Kilpatrick, investors from New York, along with their father, Edward, established a lumber company in Bridgeport. Believing the city's location and resources provided it extraordinary potential for development, the Kilpatricks began buying up land in the area. Other investors became interested in the city, and in 1889 the Bridgeport Land and Development Company was incorporated. This company bought up land and laid out a new grid pattern for the city, which incorporated in 1891. Frank Kilpatrick, who became the city's mayor, built a series of imposing Queen Anne-style houses on the street now known as Kilpatrick Row. Several factories, including a pipe works, stove works, rail car works, and planing mill, were built along the river. The rapid development of Bridgeport came to an abrupt end, however, with the onset of the Panic of 1893. Investors withdrew from the area, and the Bridgeport Land and Improvement Company went out of business.

Frank Kilpatrick returned to Bridgeport in 1895, and managed to lure some industry to the city. The Mission Revival-style Bridgeport Depot was completed in 1917, and two hosiery mills were operating in the city by the 1920s. The construction of the nearby Widows Creek Power Plant by the Tennessee Valley Authority in the 1950s brought a small housing boom to the city.

According to the U.S. Census Bureau, the city has a total area of 3.2 square miles (8.3 km2), of which 3.1 square miles (8.0 km2) is land and 0.1 square miles (0.26 km2) (4.00%) is water. The city is situated along the western bank of the Tennessee River, at river mile 410. This section of the river is part of Guntersville Lake, which is created by Guntersville Dam about 60 miles downstream from Bridgeport. The Cumberland Plateau rises prominently to the northwest, and the plateau's southern extension, Sand Mountain, rises across the river to the east. U.S. Route 72 connects Bridgeport with South Pittsburg across the Tennessee state line to the north, and Stevenson to the southwest. 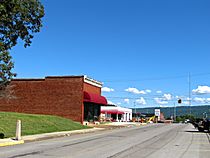 There were 1,159 households out of which 29.7% had children under the age of 18 living with them, 49.7% were married couples living together, 13.9% had a female householder with no husband present, and 31.5% were non-families. 29.5% of all households were made up of individuals and 13.1% had someone living alone who was 65 years of age or older. The average household size was 2.35 and the average family size was 2.88.

There were 1,012 households out of which 26.4% had children under the age of 18 living with them, 45.0% were married couples living together, 15.3% had a female householder with no husband present, and 32.2% were non-families. 27.9% of all households were made up of individuals and 13.1% had someone living alone who was 65 years of age or older. The average household size was 2.39 and the average family size was 2.89.

The climate in this area is characterized by hot, humid summers and generally mild to cool winters. According to the Köppen Climate Classification system, Bridgeport has a humid subtropical climate, abbreviated "Cfa" on climate maps.

All content from Kiddle encyclopedia articles (including the article images and facts) can be freely used under Attribution-ShareAlike license, unless stated otherwise. Cite this article:
Bridgeport, Alabama Facts for Kids. Kiddle Encyclopedia.