DeKalb County is a county of the U.S. state of Alabama. As of the 2010 census, the population was 71,109. Its county seat is Fort Payne and it is named after Major General Baron Johan DeKalb.

DeKalb County was created by the Alabama legislature on January 9, 1836, from land ceded to the Federal government by the Cherokee Nation. It was named for Major General Baron Johann de Kalb, a hero of the American Revolution.

DeKalb County was the one time home of the famous Cherokee Native American Sequoyah.

The county's eastern edge, along the state line, was also the epicenter of an earthquake on April 29, 2003, measuring 4.6 on the Richter scale. Power was knocked out in the area, mirrors and pictures thrown to the floor, foundations cracked, and one chimney fell to the ground. It was felt over a significant portion of the southeastern states, including quite strongly in northeastern Alabama and neighboring northwestern Georgia, and nearby eastern Tennessee (especially near Chattanooga). It was also felt slightly in western upstate South Carolina, far west-southwestern North Carolina, south and southeastern Kentucky, and east-northeastern Mississippi.

On the whole, DeKalb County is a dry county. In 2005, a change in local laws enabled Fort Payne to become the only location in the county to allow the legal sale of alcohol. Collinsville later allowed alcohol sales.

DeKalb County saw one of the highest death tolls in Alabama during a massive tornadic system in April 2011, the 2011 Super Outbreak, with 31 deaths reported in the county. 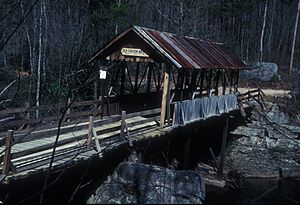 All content from Kiddle encyclopedia articles (including the article images and facts) can be freely used under Attribution-ShareAlike license, unless stated otherwise. Cite this article:
DeKalb County, Alabama Facts for Kids. Kiddle Encyclopedia.