Fort Payne is a city in and county seat of DeKalb County, in northeastern Alabama, United States. At the 2020 census, the population was 14,877.

European-American settlers gradually developed the settlement around the former fort. It grew rapidly in the late 19th century based on industrial resources and manufacturing increasing in the early 20th centuries. At the beginning of the 21st century, it still had 7000 workers in 100 mills producing varieties of socks, nearly half the world production.

In the 19th century, the site of Fort Payne was the location of Willstown, an important village of the Cherokee people. For a time it was the home of Sequoyah, a silversmith who invented the Cherokee syllabary, enabling reading and writing in the language. The settlement was commonly called Willstown, after its headman, a red-headed mixed-race man named Will. According to Major John Norton, a more accurate transliteration would have been Titsohili. The son of a Cherokee adoptee of the Mohawk people, Norton grew up among Native Americans and traveled extensively throughout the region in the early 19th century. He stayed at Willstown several times.

During the 1830s prior to Indian removal, the US Army under command of Major John Payne built a fort here that was used to intern Cherokees until relocation to Oklahoma. Their forced exile became known as the Trail of Tears.

By the 1860s, Fort Payne and the surrounding area were still sparsely settled. It had no strategic targets and was the scene of only minor skirmishes between Union and Confederate forces during the Civil War. About the time of the Second Battle of Chattanooga, a large Union force briefly entered the county, but it did not engage substantial Confederate forces.

In 1878 Fort Payne became the county seat, and in 1889 it was incorporated as a town. The community of Lebanon had served as the county seat since 1850. With the completion of rail lines between Birmingham and Chattanooga, Fort Payne began to grow, as it was on the rail line. County sentiment supported having the seat in a community served by the railroad.

In the late 1880s, Fort Payne experienced explosive growth as investors and workers from New England and the North flooded into the region to exploit coal and iron deposits discovered a few years earlier. This period is called the "Boom Days", or simply the "Boom". Many of the notable and historic buildings in Fort Payne date from this period of economic growth, including the state's oldest standing theater, the Fort Payne Opera House; the former factory of the Hardware Manufacturing Company (today known as the W. B. Davis Mill Building and home to an antiques mall and deli), and the Fort Payne Depot Museum, formerly the passenger station for the present-day Norfolk Southern Railway. Today, it serves as a museum of local history. 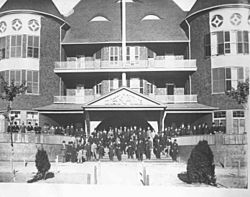 The iron and coal deposits turned out to be much smaller than expected. Many of the Boom promoters left the region, and Fort Payne experienced a period of economic decline. That downturn shifted in 1907, when the W.B. Davis Hosiery Mill began operations. This was the beginning of decades of hosiery manufacture in Fort Payne. By the beginning of the 21st century, the hosiery industry in Fort Payne employed over 7,000 people in more than 100 mills. It produced more than half of the socks made in the United States.

Beginning in the 1990s, the North American Free Trade Agreement and the Central American Free Trade Agreement lowered tariffs on textile products imported into the United States, resulting in large increases in sock imports. Many businesses in Fort Payne accused foreign manufacturers, particularly those from China, of engaging in dumping of socks below cost to force American companies out of the sock business. By 2005, hosiery mill employment in Fort Payne had declined to around 5,500, and several mills had closed. In late 2005, the federal government gained an agreement with the Chinese government to slow the schedule for the removal of tariffs, delaying their full removal until 2008.

Reacting more quickly to changes than at the end of the Boom, in the 1990s, business and civic leaders in Fort Payne began to take steps to diversify the city's economy. Several new commercial and industrial projects were developed. The largest was the 2006 construction of a distribution center for The Children's Place stores, a facility that employed 600 people in its first phase of operation.

Fort Payne houses the headquarters for the nearby Little River Canyon National Preserve, a 14,000-acre (57 km2) National Park Service facility established by Congress in 1992. The canyon itself is on Lookout Mountain outside the city limits. Another attraction based on natural resources is DeSoto State Park, a smaller facility with a lodge, restaurant, cabins, and river access areas. Manitou Cave is also near Fort Payne. 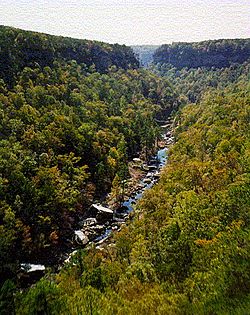 The country music group Alabama is based in Fort Payne. The city also houses the group's fan club and museum.

The city center lies in a narrow valley on Big Wills Creek in the Cumberland Plateau region immediately west of Lookout Mountain, with Sand Mountain somewhat more removed to the west. The city limits reach to the east and south so that more than half of the city's area is now located on Lookout Mountain. Drainage is through Big Wills Creek to the Coosa River.

Fort Payne is notable for a subtropical climate. Winters usually feature measurable, though infrequent, snow. Cloudmont Ski Resort on Lookout Mountain generates man-made snow as winter temperatures permit. The area is subject to occasional tornadoes. The city's northern side was struck by an F4 tornado on May 19, 1973, causing considerable damage. Exactly ten years later, a tornado struck the city again. In the Palm Sunday tornado outbreak of 1994, an F3 tornado passed just west of the city Occasionally, a hurricane that has made landfall in the Gulf of Mexico will reach Fort Payne as a tropical storm or tropical depression. However, in 1995 the eye of Hurricane Opal reached Fort Payne with hurricane-force winds. The 1993 Storm of the Century dumped more than 20 inches (51 cm) of snow on Fort Payne, immobilizing the city and the surrounding area for days. The Köppen Climate Classification subtype for this climate is "Cfa". (Humid Subtropical Climate).

Brian Jett is the Superintendent of Education.

All content from Kiddle encyclopedia articles (including the article images and facts) can be freely used under Attribution-ShareAlike license, unless stated otherwise. Cite this article:
Fort Payne, Alabama Facts for Kids. Kiddle Encyclopedia.