Johann von Robais, Baron de Kalb (June 19, 1721 – August 19, 1780), born Johann Kalb, was a Franconian-French military officer who served as a major general in the Continental Army during the American Revolutionary War and was mortally wounded while fighting the British Army during the Battle of Camden.

Kalb was born in Hüttendorf, a German village near Erlangen, Principality of Bayreuth, the son of Johann Leonhard Kalb and Margarethe Seitz. He learned French, English, and the social skills to earn a substantial military commission in the Loewendal German Regiment of the French Army in 1743.

Kalb served with distinguished honor in the War of the Austrian Succession in Flanders. During the Seven Years' War, he was promoted to lieutenant colonel and made assistant quartermaster general in the Army of the Upper Rhine, a division created by the disbanding of the Loewendal Regiment. He won the Order of Military Merit in 1763, and was elevated to the nobility with the title of baron.

In 1764, he resigned from the army and married Anna Elizabeth Emilie van Robais, an heiress to a fortune from cloth manufacturing.

He bought the Milon-la-Chapelle chateau in France. He and his wife, Anne Elisabeth Emile van Robais, had 3 children: Élie de Kalb (who married Elise Signard d'Ouffieres and had a daughter, Nicette de Kalb, who married Raymond de Vandiere de Vitrac D'Abzac, and continued to live in Milon la Chapelle); Frederic de Kalb (died during the French Revolution, without children); and Caroline de Kalb.

In 1768, he traveled to America on a covert mission for de Choiseul, on behalf of France, to determine the level of discontent among colonists. During the trip, he gained a respect for the colonists and their "spirit of independence."

In 1777, he returned again with his protégé, the Marquis de Lafayette, and joined the Continental Army. He was disappointed and angry to learn that he would not be made a major general, but with Lafayette's influence he was appointed to the rank on September 5, 1777, which he learned of as he was on the road to return to France.

He was at Valley Forge for most of the 1777–78 winter, and commanded a division of Patterson's and Learned's Brigades. He wrote letters of introduction for John Adams to the French court. De Kalb wrote:

On the whole, I have annoyances to bear, of which you can hardly form a conception. One of them is the mutual jealousy of almost all the French officers, particularly against those of higher rank than the rest. These people think of nothing but their incessant intrigues and backbitings. They hate each other like the bitterest enemies, and endeavor to injure each other wherever an opportunity offers. I have given up their society, and very seldom see them. La Fayette is the sole exception; I always meet him with the same cordiality and the same pleasure. He is an excellent young man, and we are good friends ... La Fayette is much liked, he is on the best of terms with Washington. 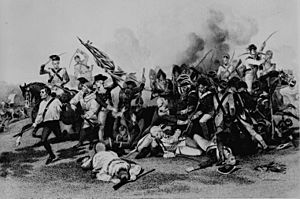 An engraving showing the wounding of Baron de Kalb 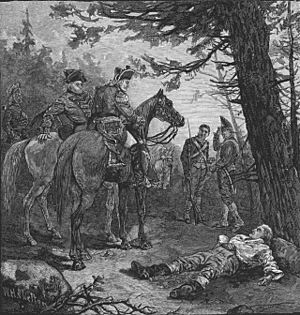 De Kalb was assigned to command a division of Maryland and Delaware troops, and he was ordered south to the Carolinas in command of these reinforcements. During the British southern campaign, he was disappointed to learn that Horatio Gates had been appointed to command instead of him. Gates led the army to a disastrous defeat at Battle of Camden on August 16, 1780. De Kalb's horse was shot from under him, causing him to tumble to the ground. Before he could get up, he was shot three times and bayonetted repeatedly by British soldiers. His friend and aide, the Chevalier du Buysson, was seriously wounded blocking additional blows with his own body.

Upon seeing de Kalb, Cornwallis told him, "I am sorry, sir, to see you, not sorry that you are vanquished, but sorry to see you so badly wounded." It is reported that Cornwallis supervised as de Kalb's wounds were dressed by his own surgeons in Camden, South Carolina. As he lay dying, de Kalb was reported to have said to a British officer, "I thank you sir for your generous sympathy, but I die the death I always prayed for: the death of a soldier fighting for the rights of man." He died three days later and was buried in Camden.

Upon visiting de Kalb's grave several years after his death, George Washington is reported to have said:

So, there lies the brave de Kalb. The generous stranger, who came from a distant land to fight our battles and to water with his blood the tree of liberty. Would to God he had lived to share its fruits! 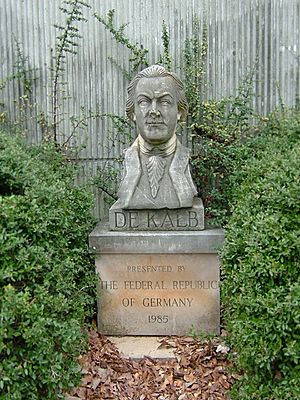 De Kalb was greatly revered by his contemporaries. Numerous towns and counties in the U.S. are named DeKalb after him, in Alabama, Georgia, Illinois, Indiana, Mississippi, Missouri, New York, Tennessee and Texas. Streets include the DeKalb Avenue in Brooklyn, New York City, Merrick, New York, DeKalb Pike (U.S. Route 202) between King of Prussia and Montgomeryville, Pennsylvania, and others. In Brooklyn, New York, the Knights of Columbus established the Baron DeKalb Council #1073 in 1906 named in his honor. His portrait was painted posthumously by Charles Willson Peale. In 1886, a monument to Baron de Kalb was erected on the grounds of the Maryland state house to honor his contributions to the American Revolution.

Two warships of the U.S. Navy were named after him, the Civil War river ironclad USS Baron DeKalb and the World War I troop transport USS DeKalb.

An American elementary school run by the U.S. Department of Defense in Nuremberg, Germany was named for him; it closed in the 1990s. Since 2006, the Major General Baron DeKalb Army Reserve Center hosts the headquarters of the 200th Military Police Command at Fort Meade, Maryland.

In Assassin's Creed III, a mission for Connor's apprentices shows that Baron de Kalb was a member of the Templar Order within the Continental Army, making him an asset for supposed Templar domination in the colonies. Here, Connor's apprentices killed de Kalb in order to reduce Templar influence in the army.

All content from Kiddle encyclopedia articles (including the article images and facts) can be freely used under Attribution-ShareAlike license, unless stated otherwise. Cite this article:
Johann de Kalb Facts for Kids. Kiddle Encyclopedia.