Camden is a city in, and the county seat of, Kershaw County, South Carolina, United States. The population was 6,838 in the 2010 census. It is part of the Columbia, South Carolina, Metropolitan Statistical Area.

Camden is the oldest inland city and fourth oldest city in South Carolina. It is near the center of the Cofitachequi chiefdom that existed in the 1500s. In 1730, Camden became part of a township plan ordered by King George II. Kershaw County’s official web site states, “Originally laid out in 1732 as the town of Fredericksburg in the Wateree River swamp (south of the present town) when King George II ordered eleven inland townships established along South Carolina's rivers, few of the area settlers chose to take lots surveyed in the town, choosing the higher ground to the north. The township soon disappeared.” In 1758, Joseph Kershaw, from Yorkshire, England came into the township, established a store and renamed the town Pine Tree Hill. Camden became the main inland trade center in the colony. Kershaw suggested that the town be renamed Camden, in honor of Lord Camden, a champion of colonial rights in the British Parliament.

May 1780 brought the American Revolution to Charleston, South Carolina, when it fell under the Crown's control. Lord Charles Cornwallis and 2,500 of his Loyalist and British troops marched to Camden and established there the main British supply post for the Southern campaign. The Battle of Camden, the worst American defeat of the Revolution, was fought on August 16, 1780 near Camden, and on April 25, 1781 the Battle of Hobkirk Hill was fought between about 1,400 troops led by General Nathanael Greene and 950 Loyalists and British soldiers led by Lord Francis Rawdon. The latter battle was a costly win for the British, and forced them to leave Camden and retreat to the coast. After the Revolution, Camden's prominence and wealth grew as a major interior trading town with direct ties to Charleston and the world. Regional products, augmented with goods from the interior of North Carolina and far lands to the west were transported from Camden to Charleston on flat-bottom riverboats that plied the adjacent Wateree river before the railroad arrived in 1842.

Camden, although not involved directly with the Civil War, did send six generals who contributed significantly. Richard Rowland Kirkland - 'The Angel of Marye's Heights' - is interred in the Old Quaker Cemetery. At the end of the war, components of Sherman's army burned Confederate and nearby properties including a full block of downtown buildings. The last Federal officer killed in the Civil War died in a skirmish near Camden.

Starting in the mid-1880s the Camden area became an increasingly popular destination for wealthy northern families to spend the winter. Eventually three resort hotels provided state of the art winter tourism activities well into the 1930s and beyond. The town became associated with many equestrian activities, and is now the home of the third oldest active polo field in America. In the winter, more than 1,500 thoroughbreds call the area home. According to Kershaw County’s web site, “Horse related activities became very popular. That interest in equine activities has continued and today the horse industry is a major part of the county economy. For that reason, the county is known as the ‘Steeplechase Capital of the World’.”

Because of its long history and many years of wealthy winter visitors and deep-pocket northern owners, Camden has an enviable inventory of antebellum homes and charm that remains unique among towns of its size in South Carolina and elsewhere.

There were 2,967 households out of which 27.7% had children under the age of 18 living with them, 41.1% were married couples living together, 16.5% had a female householder with no husband present, and 36.3% were non-families. 35.6% of all households were made up of individuals and 18.9% had someone living alone who was 65 years of age or older. The average household size was 2.26 and the average family size was 2.94. 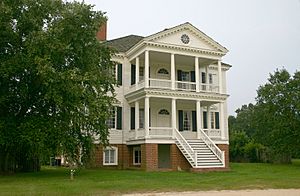 The Carolina Cup is an annual event held on either the final Saturday in March or the first Saturday of April. The first race was held March 22, 1930 and has been held every year since, with the exception of 1943 and 1945, during World War II. The races have become a South Carolina tradition, and normally draw a crowd of over 70,000 spectators. The "Cup" has become a premier social sporting event.

Among major steeplechase horse races, it is unique in that South Carolina state law prohibits gambling on horse racing.

Springdale Race Course is also home, since 1970, to the Marion duPont Scott Colonial Cup held on the third Sunday in November annually. In addition to James Madison's Montpelier in Orange County, Virginia, Marion duPont Scott owned Holly Hedge in Camden from 1944 until her death in 1983.

All content from Kiddle encyclopedia articles (including the article images and facts) can be freely used under Attribution-ShareAlike license, unless stated otherwise. Cite this article:
Camden, South Carolina Facts for Kids. Kiddle Encyclopedia.