Tracy City is a town in Grundy County, Tennessee, United States. Incorporated in 1915, the population was 1,481 at the 2010 census. Named after financier Samuel Franklin Tracy, the city developed out of railroad and mining interests after coal was found in 1840. In 2010 the people of Tracy City elected a dead man, Carl Robin Geary, as mayor.

In 1840 local boys digging a groundhog out of the ground discovered coal. In the early 1870s Tracy City an experimental blast furnace was built by Samuel Jones and owned by the Tennessee Coal, Iron and Railroad Company. The furnace, called "Fiery Gizzard", was built to see if local coal would be used to produce iron. The furnace made 15 tons of iron before the stovepipe fell on the third day. The former location of the furnace is marked with a historical marker. The coke ovens at Tracy City supplied railroad and industrial fuel and workers and their families moved into the area in great numbers from 1875 until 1900. By 1910 the industry faded due to problems invoked by labor unions and convict labor. Tracy City is also home to the oldest family bakery in Tennessee, Dutch Maid Bakery. In 1987 the coke ovens were placed on the National Register of Historic Places. Tracy City was incorporated in 1915. 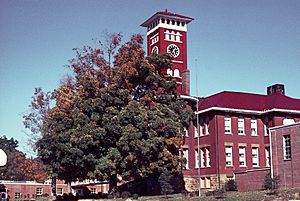 There were 712 households out of which 31.6% had children under the age of 18 living with them, 51.4% were married couples living together, 11.0% had a female householder with no husband present, and 33.3% were non-families. 29.6% of all households were made up of individuals and 13.6% had someone living alone who was 65 years of age or older. The average household size was 2.36 and the average family size was 2.92.

Tracy City serves as the location of the Grundy County Historical Society and Tracy City Library. The city has one art gallery named "The Nature Works"[1] which focuses solely on nature and wildlife. Twelve churches are located in Tracy City, including the Tracy City First Baptist Church, which was founded in 1892.

Tracy City is at one end of the Fiery Gizzard Trail, renowned for scenic beauty and diversity.

The town has a road side picnic area and Tracy City Mini Park. The town also has a community center, the Plainview Community Center.

All content from Kiddle encyclopedia articles (including the article images and facts) can be freely used under Attribution-ShareAlike license, unless stated otherwise. Cite this article:
Tracy City, Tennessee Facts for Kids. Kiddle Encyclopedia.