The facility is owned and operated by the Tennessee Valley Authority (TVA). Construction was started in 1970 and was completed in 1978.

Water is pumped from Nickajack Lake on the Tennessee River at the base of Raccoon Mountain to a storage reservoir built at the top of the mountain. The reservoir at the top of the mountain covers 528 acres (214 ha), with a dam that is 230 feet (70 m) high and 5,800 feet (1,800 m) long, the largest rock-fill dam ever built by TVA. It takes 28 hours to fill the upper reservoir. During periods of high electric demand, water can be released from the reservoir through a tunnel drilled through the center of the mountain, driving electric generators in an underground hydroelectric plant. The plant has a maximum power output of 1,652 megawatts (2,215,000 hp) and can generate for up to 22 hours. The plant is used most days and serves as an important element for peak power generation and grid balancing in the TVA system.

The plant was idled in March 2012 due to cracks in the generators' rotors. The plant came entirely back on line in April 2014. 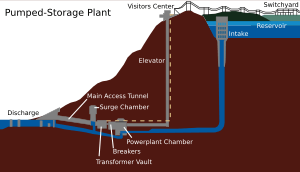 Diagram of the facility

All content from Kiddle encyclopedia articles (including the article images and facts) can be freely used under Attribution-ShareAlike license, unless stated otherwise. Cite this article:
Raccoon Mountain Pumped-Storage Plant Facts for Kids. Kiddle Encyclopedia.