Collegedale is a city in Hamilton County, Tennessee, United States. The population was 8,282 at the 2010 census and 11,492 in a 2018 estimate. Collegedale is a suburb of Chattanooga and is part of the Chattanooga, TN–GA Metropolitan Statistical Area. Collegedale is home to Southern Adventist University. The median household income is one of the highest in Hamilton County. It has been ranked as one of the best and safest places to live in Tennessee. The unincorporated community of Ooltewah is an enclave in Collegedale.

Collegedale was founded as the site of Southern Adventist University (then Southern Junior College) in 1916. It was incorporated under a city manager government in 1968. J. M. Ackerman was the first city manager, and Fred Fuller served as the city's first mayor.

According to the United States Census Bureau, the city has a total area of 8.3 square miles (21 km2), all land.

In August 2011, the city took over control of the Collegedale Public Library, which was previously operated under the Hamilton County library system. Library membership is available on a paid subscription basis, free to residents of Collegedale.

Six parks are managed by the Parks & Recreation Department of Collegedale:

The town also has youth and adult softball leagues.

McKee Foods is headquartered in Collegedale. Originally launched in Chattanooga in 1934, the company moved to a facility on the campus of Southern Adventist University in 1956. McKee Foods is the producer of Little Debbie and Sunbelt snack foods.

Wolftever Creek Elementary School and Ooltewah Middle School are the two public schools inside of city limits. Both schools belong to the Hamilton County Schools system. 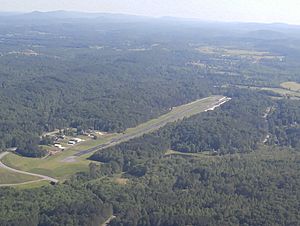 The city is located just off the I-75 corridor. Collegedale Municipal Airport is owned by the city of Collegedale and has about 120 aircraft stationed there. In 2003, the airport was awarded the Tennessee Aeronautics Commission's "Airport of the Year" title.

Collegedale has a recycling program which requires the public to bring their recyclables to the city public works department. The city uses recycling to reduce the costs of landfill waste disposal and offsets the cost of recycling by selling the recyclable materials. Comcast provides cable services and CenturyLink supplies landline phone services. Electricity is supplied by EPB and the Chattanooga Gas Company supplies gas needs. The city and/or Hamilton County handles resident sewer needs and Eastside Utility District handles water services.

All content from Kiddle encyclopedia articles (including the article images and facts) can be freely used under Attribution-ShareAlike license, unless stated otherwise. Cite this article:
Collegedale, Tennessee Facts for Kids. Kiddle Encyclopedia.