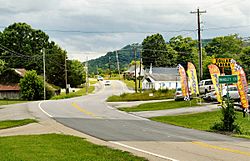 Georgetown is an unincorporated community at the junction of Bradley, Hamilton, and Meigs counties, Tennessee. The community is located along State Route 60 near its intersection with State Route 58.

Georgetown is the place name associated with U.S. Postal Service zip code 37336. The Zip Code Tabulation Area for that zip code had a population of 3,416, according to the 2000 U.S. Census.

All content from Kiddle encyclopedia articles (including the article images and facts) can be freely used under Attribution-ShareAlike license, unless stated otherwise. Cite this article:
Georgetown, Tennessee Facts for Kids. Kiddle Encyclopedia.