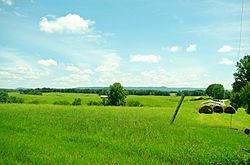 Farm in the Bone Cave area

The community is named for nearby Big Bone Cave, one of the most famous and historic caves in Tennessee. Big Bone Cave was named for the discovery of a giant ground sloth skeleton in 1811 during the mining of cave dirt to be processed for saltpeter.

A post office called Bone Cave was established in 1866, and remained in operation until it was discontinued in 1977.

All content from Kiddle encyclopedia articles (including the article images and facts) can be freely used under Attribution-ShareAlike license, unless stated otherwise. Cite this article:
Bone Cave, Tennessee Facts for Kids. Kiddle Encyclopedia.