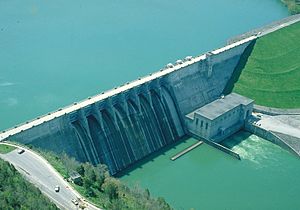 Center Hill Lake is a reservoir in the U.S. state of Tennessee. It is located in Middle Tennessee near Smithville. Created by means of a dam constructed by the U.S. Army Corps of Engineers in 1948, the lake has a dual purpose: electricity production and flood control. Center Hill Dam is 260 ft (79 m) high, and it is composed of concrete and earth structures, with 8 gates that are 50 ft (15 m) wide each. Center Hill Lake is one of four major flood control reservoirs for the Cumberland; the others being Percy Priest Lake, Dale Hollow Reservoir, and Lake Cumberland. 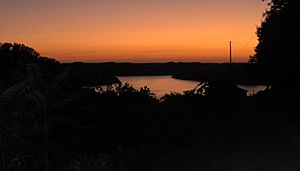 Major tributaries of Center Hill Lake include the Caney Fork (the main tributary) and the Falling Water River.

Edgar Evins, Burgess Falls and Rock Island State Parks contain portions of the lake's shoreline, the rest of which has been relatively underdeveloped until recent years. Lately, the area surrounding Center Hill Lake has been the target of land developers, who have begun construction on several upper-middle-class vacation homes and condos. Some locals protest that these actions are destroying the beauty of nature that make it such an attractive locale for such developments.

In January 2007, the U.S. Army Corps of Engineers placed Center Hill Dam under a high risk for failure, along with Wolf Creek Dam in Russell County, Kentucky.

All content from Kiddle encyclopedia articles (including the article images and facts) can be freely used under Attribution-ShareAlike license, unless stated otherwise. Cite this article:
Center Hill Lake Facts for Kids. Kiddle Encyclopedia.