Putnam County is a county located in the U.S. state of Tennessee. As of the 2010 census, the population was 72,321. Its county seat is Cookeville.

Putnam County is named in honor of Israel Putnam, who was a hero in the French and Indian War and a general in the American Revolutionary War. The county was initially established on February 2, 1842, when the Twenty-fourth Tennessee General Assembly enacted a measure creating the county from portions of Jackson, Overton, Fentress, and White counties.

After the survey was completed by Mounce Gore, the Assembly instructed the commissioners to locate the county seat, to be called "Monticello," near the center of the county. Contending, however, that the formation of Putnam was illegal because it reduced their areas below constitutional limits, Overton and Jackson counties secured an injunction against its continued operation. Putnam officials failed to reply to the complaint, and in the March 1845 term of the Chancery Court at Livingston, Chancellor Bromfield L. Ridley declared Putnam unconstitutionally established and therefore dissolved. The 1854 act reestablishing Putnam was passed after Representative Henderson M. Clements of Jackson County assured his colleagues that a new survey showed that there was sufficient area to form the county. White Plains, near modern Algood, acted as a temporary county seat.

The act specified the "county town" be named "Cookeville" in honor of Richard F. Cooke, who served in the Tennessee Senate from 1851 to 1854, representing at various times Jackson, Fentress, Macon, Overton and White Counties. The act authorized Joshua R. Stone and Green Baker from White County, William Davis and Isaiah Warton from Overton County, John Brown and Austin Morgan from Jackson County, William B. Stokes and Bird S. Rhea from DeKalb County, and Benjamin A. Vaden and Nathan Ward from Smith County, to study the Conner survey and select a spot, not more than two and one-half miles from the center of the county, for the courthouse. The first County Court chose a hilly tract of land, then owned by Charles Crook, for the site.

Putnam County was the site of several saltpeter mines. Saltpeter is the main ingredient of gunpowder and was obtained by leaching the earth from several local caves. Calfkiller Saltpeter Cave, located in the Calfkiller Valley, was a major mining operation, as was Johnson Cave, also located in the Calfkiller Valley. Both caves still contain significant remnants of the mining activity. Several other caves in the county were the site of smaller operations. Most saltpeter mining in Middle Tennessee occurred during the War of 1812 and the Civil War.

Sunset over Interstate Drive in Cookeville 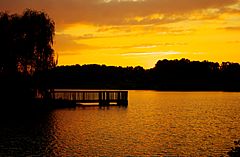 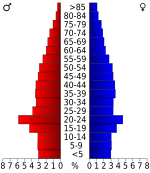 According to the US Census for 2013 Putnam County has the highest wealth inequality in America. 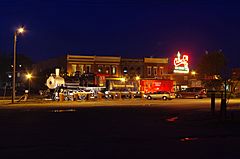 All content from Kiddle encyclopedia articles (including the article images and facts) can be freely used under Attribution-ShareAlike license, unless stated otherwise. Cite this article:
Putnam County, Tennessee Facts for Kids. Kiddle Encyclopedia.