Algood is a city in Putnam County, Tennessee, United States. The population was 3,495 at the 2010 census. It is part of the Cookeville Micropolitan Statistical Area.

While Algood was not established until the late 19th century, in the early 19th century a small community developed just south of modern Algood at White Plains, an antebellum plantation and important stopover along the Walton Road (which connected Nashville and Knoxville). In the 1880s, the Nashville & Knoxville Railroad erected a depot at what is now Algood. The land on which the depot was built was purchased from a circuit rider and early settler named Joel Algood, and thus the train stop was named after him. For a period of time the area would be called Algood's Old Fields. In 1899, the Algood Methodist Church (now Algood United Methodist Church) was built on land donated by the children of this early settler. Algood was initially incorporated in 1901, but repealed its own charter two years later. The town reincorporated in 1911.

The town is situated at the base of Algood Mountain (el. 1,456 feet (444 m)), one of a series of low, wide ridges in the area that present as "stair steps" from the Highland Rim to the Cumberland Plateau. Algood is centered along the former State Route 42 (Main Street), a state highway designation which no longer exists, just east of the road's two junctions with State Route 111.

According to the United States Census Bureau, the town has a total area of 4.0 square miles (10 km2), all land. 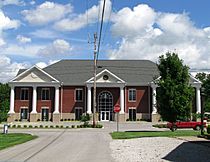 There were 1,181 households out of which 29.8% had children under the age of 18 living with them, 48.7% were married couples living together, 14.9% had a female householder with no husband present, and 32.9% were non-families. 30.1% of all households were made up of individuals and 12.4% had someone living alone who was 65 years of age or older. The average household size was 2.35 and the average family size was 2.87.

All content from Kiddle encyclopedia articles (including the article images and facts) can be freely used under Attribution-ShareAlike license, unless stated otherwise. Cite this article:
Algood, Tennessee Facts for Kids. Kiddle Encyclopedia.