Burgess Falls State Park is a state park and state natural area in Putnam County and White County, Tennessee, located in the southeastern United States. The park is situated around a steep gorge in which the Falling Water River drops 250 feet (76 m) in elevation in less than a mile, culminating in a 136-foot (41 m) cataract waterfall.

The Burgess Falls State Natural Area, which covers 350 acres (1.4 km2), is managed by the Tennessee Department of Environment and Conservation. 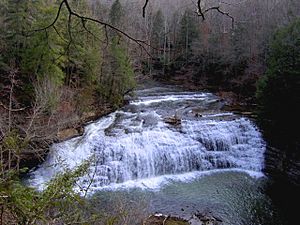 Burgess Falls is named after Tom Burgess, a Revolutionary War veteran who settled along this section of the Falling Water River in the 1810s. The Burgess family used the river's rapids to power a grist mill and eventually a saw mill which supplied early settlers with corn meal and lumber.

In 1924, the City of Cookeville built an earthen dam along the river a mile or so upstream from Burgess Falls. After a flood destroyed the dam in 1928, the city replaced it with a concrete dam that provided the area with electricity until the arrival of the Tennessee Valley Authority in 1944. Due in large part to calls from Cookevillians to protect the area, Burgess Falls State Park was established in 1971. Part of a pipeline bridge still spans the river in the vicinity of Little Falls. The pipeline originally crossed the river into a tunnel on the north walls of the gorge and emerged to cross the river again near Middle Falls en route to a powerhouse. 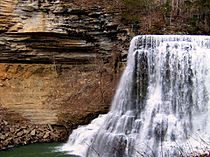 Profile view of Burgess Falls, showing the walls of the gorge

The entrance to Burgess Falls State Park is located just off Tennessee State Route 135 roughly halfway between Cookeville and Sparta. The park is open year-round, but is closed on days of high precipitation due to the Falling Water River's volatility.

The Burgess Falls State Natural Area includes Burgess Falls Lake and part of the forest on the both sides of the river in the lake's vicinity.

All content from Kiddle encyclopedia articles (including the article images and facts) can be freely used under Attribution-ShareAlike license, unless stated otherwise. Cite this article:
Burgess Falls State Park Facts for Kids. Kiddle Encyclopedia.