Liberty is a town in DeKalb County, Tennessee, United States. The population was 367 at the 2000 census and 310 in 2010. Liberty's main street was listed on the National Register of Historic Places in 1987 as the Liberty Historic District.

Liberty was settled circa 1797 by Adam Dale, an American Revolutionary War veteran from Maryland who built a mill on Smith Fork Creek.

Much of Main Street in Liberty is included in an historic district listed on the National Register of Historic Places. Properties in the historic district include the Liberty High School, built from limestone quarried in the area, and the Salem Baptist Church and cemetery.

On the evening of March 23, 1889, Liberty was hit by a tornado that uprooted trees and caused extensive damage to homes. A local church was completely destroyed. According to records, there were no fatalities reported.

According to the United States Census Bureau, the town has a total area of 1.0 square mile (2.6 km2), all land.

There were 160 households, out of which 31.9% had children under the age of 18 living with them, 53.1% were married couples living together, 10.6% had a female householder with no husband present, and 29.4% were non-families. 27.5% of all households were made up of individuals, and 8.1% had someone living alone who was 65 years of age or older. The average household size was 2.29 and the average family size was 2.70. 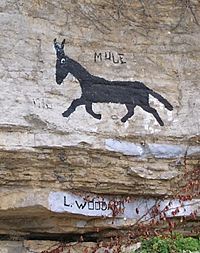 The "Allen Bluff Mule" is a painting of a mule on a limestone bluff on U.S. Route 70 in Liberty. Some residents say a local man named Lavader Woodard painted the mule; other residents contend that it was painted as an advertisement of a local stock farm. Dr. Wayne T. Robinson has claimed to be the original painter of the Liberty Mule:

In early October 1906, I climbed up the face of the Allen Bluff to a ledge and with some coal tar made a flat picture of a character from a famous comic strip of that day. Everybody remembers Maud, the mule. That was 51 years ago, and even though it has been exposed to the elements and to nearby earth-shaking explosions, erosion has dimmed it very little. On the same bluff is the name of Will T. Hale, which was inscribed about 85 years ago.

By this account, Dr. Robinson painted the original mule while a 21-year-old college student inspired by Maud the Mule, from the Frederick Burr Opper comic strip And Her Name Was Maud.

In 2003, Liberty residents became upset that an expansion of U.S. 70 to a four-lane road could threaten the mule painting. The residents started a letter writing campaign to the Tennessee Department of Transportation. Supporters of the mule also placed signs along the roadway stating "Save the Mule." Ultimately the road expansion was far enough away from the mule, that it was never in any danger.

All content from Kiddle encyclopedia articles (including the article images and facts) can be freely used under Attribution-ShareAlike license, unless stated otherwise. Cite this article:
Liberty, Tennessee Facts for Kids. Kiddle Encyclopedia.