Cedars of Lebanon State Forest is known for its cedar glades, a unique type of ecosystem that has adapted to the thin (or nonexistent) soil layers that often occur in the eastern Central Basin. These glades are typically flanked by thick stands of red cedar, a type of juniper tree that can survive in soil layers too thin to support most large wooded plants. The presence of the red cedar in the basin reminded the region's early Euro-American settlers of the Lebanese cedar forests of Biblical fame.

Like most karst areas, Cedars of Lebanon State Forest is drained in large part by underground streams. The water in the forest likely flows into nearby streams, such as Hurricane Creek. These streams empty into the Stones River's J. Percy Priest Lake impoundment, which is located a few miles west of the park. 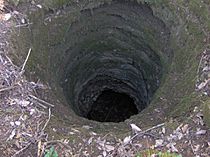 Sinkhole along the Hidden Springs Trail

Cedars of Lebanon State Forest is underlain by Ordovician period limestone, formed roughly 460 million years ago from calcareous ooze deposited by a primordial sea that once covered Middle Tennessee. Weathering of this rock has led to the creation of karst formations such as joints, underground streams, caves, and sinkholes, which are common throughout the park and forest. The forest is located in a flat section of the Central Basin characterized by thin soil layers where the limestone bedrock is often exposed.

Cedar glade communities have adapted to the basin's harsh barrens, where the soil is too thin to support most plant types, especially large wooded plants. The glades are typically open areas resembling rock or gravel-strewn meadows. Most glades include small areas of bare rock where nothing grows, gravelly areas where only grasses grow, and patches of very thin soil that support shrubs and small red cedars. Cedar glades are typically surrounded by stands of red cedar known as cedar thickets. Beyond the cedar thickets, the soil is thick enough to support a hardwood forest consisting primarily of oak and hickory.

The earliest Euro-American settlers arrived in Wilson County in the late 1790s. The city of Lebanon, established in 1802, was named after the abundance of red cedar in the area. The settlers believed (mistakenly) that the red cedar stands were similar to the cedar forests of ancient Lebanon, which were harvested by Phoenician city-states and used in the construction of the Temple of Solomon. The first Wilson County courthouse and many other early structures in the county were constructed using red cedar logs.

For much of the 19th century, the barren glades were largely devoid of human habitation, with the exception of a few small farms. In an 1879 essay on the history of Wilson County, James Drake described the various soil types in the county, which included a "dark soil, peculiar to the cedar flats, the least desirable of any we have, and subject to drought, being usually near the rock." The town of Gladeville was established in 1852 just west of the modern state forest boundaries and grew into a sizeable hamlet until the outbreak of the American Civil War.

In the late 19th and early 20th centuries, the high demand for lumber led to the harvesting of most of the forests in the Central Basin. Red cedar in particular was popular for use in the making of furniture, fence rails, and pencils. In the cedar flats of Wilson County, small farmers were struggling with depletion of the already-thin soil layer caused by poor farming tactics. In 1935, as part of the New Deal, the federal government initiated a plan to resettle farmers living in badly eroded lands to allow the devastated forests to recover. As part of the Lebanon Cedar Forest Project, the federal Resettlement Administration helped move the farmers in the cedar flats to new locations, and the Works Project Administration constructed forestry and recreational facilities and planted thousands of red cedar seedlings. The work was supervised by the United States Forestry Service. "Lebanon Cedar Forest" officially opened in 1937, with local newspaper editor Dixon Merritt presiding over the opening ceremony. Although the land was managed by the Tennessee Department of Conservation, the federal government retained ownership until 1955.

Botanists began noting the ecological importance of the cedar glades as early as 1901, when German-born doctor Augustin Gattinger (1825–1903) mentioned the glades in his book The Flora of Tennessee and the Philosophy of Botany. Research conducted by Elsie Quarterman of Vanderbilt University led to the forest's designation as a National Natural Landmark in 1973. In 1995, Cedar Lodge and several other structures built by the WPA in the 1930s and 1940s were placed on the National Register of Historic Places. 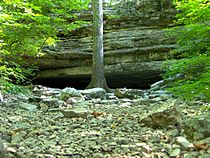 Cedars of Lebanon State Park has 117 campsites, 11 picnic shelters, 8 miles (13 km) of hiking trails, a group lodge, and a meeting hall. A small museum, the Merritt Nature Center, displays some of the forest's natural features. The park also maintains a disc golf course.

The park's eight miles (13 km) of hiking trails range in size from 0.5 to 5 miles (0.8 to 8 km). The 0.5-mile (0.8 km) Cedar Glades Trail, which begins at the park visitor center, is a self-guided interpretive trail that crosses several cedar glade habitats characteristic of glades found in the eastern basin. The 2-mile (3.2 km) Cedar Forest Trail, which begins near the junction of Cedar Forest Road and WPA Road, loops through a mixed oak-hickory and red cedar forest and passes several sizeable sinkholes and blockfields. The 0.5-mile (0.8 km) Dixon Merritt Trail begins behind the Merritt Nature Center and provides access to Jackson Cave. The 0.5-mile (0.8 km) Limestone Sinks Trail is another self-guided trail that passes several large limestone sinks. The 5-mile (8 km) Hidden Springs Trail, which starts near the picnic area, loops through multiple terrain types characteristic of the state forest, including a large limestone sink and associated dry streambed, several substantial cedar glades, and a dense stand of mixed red cedar and oak-hickory forest.

All content from Kiddle encyclopedia articles (including the article images and facts) can be freely used under Attribution-ShareAlike license, unless stated otherwise. Cite this article:
Cedars of Lebanon State Park Facts for Kids. Kiddle Encyclopedia.