Allardt is a city in Fentress County, Tennessee, United States. The population was 634 at the 2010 census. The current mayor Ms. Patricia (Pat) Brown Clark was elected in 2018. According to the city charter, there are three city council board members, currently (as of 2018) Chris Crabtree, Thomas Potter, and Michael Wiley.

After 1880, Frederick Allardt and Bruno Gernt brought a group of Germans from Michigan to settle in the area. The town was incorporated in 1964.

According to the United States Census Bureau, the city has a total area of 3.8 square miles (9.8 km2), all of it land. The city is situated atop the western Cumberland Plateau in a relatively broad area surrounded by rugged hills. Tennessee State Route 52 passes roughly west-to-east through the city, connecting it with Jamestown to the northwest and Rugby to the east. State Route 296 intersects State Route 52 near the center of Allardt, and continues directly westward to U.S. Route 127. 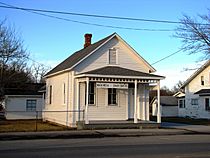 There were 259 households, out of which 31.3% had children under the age of 18 living with them, 64.5% were married couples living together, 9.7% had a female householder with no husband present, and 23.9% were non-families. 21.2% of all households were made up of individuals, and 10.0% had someone living alone who was 65 years of age or older. The average household size was 2.48 and the average family size was 2.85.

Every October the town hosts the Great Pumpkin Festival and Weigh-Off, which coincides with world-wide pumpkin weigh-off.

The climate in this area is characterized by hot, humid summers and generally mild to cool winters. According to the Köppen Climate Classification system, Allardt has a humid subtropical climate, abbreviated "Cfa" on climate maps.

All content from Kiddle encyclopedia articles (including the article images and facts) can be freely used under Attribution-ShareAlike license, unless stated otherwise. Cite this article:
Allardt, Tennessee Facts for Kids. Kiddle Encyclopedia.