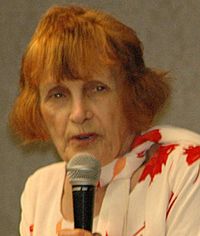 Ramey left Kentucky to work for the war effort in Washington, D.C., and won the Miss District of Columbia pageant and then became Miss America in 1944. She was the first red-haired contestant to win the title.

All content from Kiddle encyclopedia articles (including the article images and facts) can be freely used under Attribution-ShareAlike license, unless stated otherwise. Cite this article:
Venus Ramey Facts for Kids. Kiddle Encyclopedia.