Carter Caves State Resort Park is located in Carter County, Kentucky, United States, along Tygarts Creek. It is formed by Carter Caves, and nearby Cascade Caves, which were added to the park in 1959. On December 16, 1981, 146 acres (59 ha) of the park were designated as nature preserves. Bat Cave and Cascade Caverns State Nature Preserves were dedicated for the protection of the Indiana bat, mountain maple, and Canada yew, all endangered species.

The park was in various private hands for almost 200 years until the last private family owners, the J.F. Lewis family and various other private investors, including local Rotary Clubs, donated the large tract of property (945 acres (382 ha)) to the Commonwealth of Kentucky in 1946. The purchase of the caves and surrounding land was driven by Governor William Jason Fields, a native of Carter County. 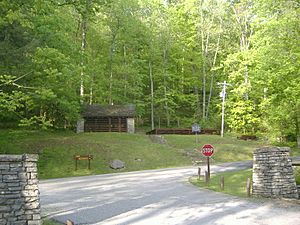 There are several cave tours offered. Guided tours of Cascade Cave and X-Cave are available year round. Bat Cave and Saltpetre Cave are only open in the summer, and close during the winter hibernation season due to the threat of white nose syndrome, a disease which threatens several endangered species of bats.

Cascade Cave is the name for three different caves in the same area and is together the largest cave in the park. It features an underground lake room and an 30-foot (9.1 m) underground waterfall.

X Cave, named for the crossing pattern of its passages, features some of the largest rock formations in the park.

Saltpetre Cave was mined during the War of 1812 because saltpetre, or potassium nitrate, is a major component in gunpowder. Historic activities are a major part of the Saltpetre Cave tour. Bat Cave is also toured in the summer months, between Memorial Day and Labor Day, and is considered a "wild" cave tour since the cave has not been improved for walking tours. The cave is unique in that it is a hibernaculum for the endangered Indiana bat in the winter months.

Laurel Cave is the most visited of the non-commercial caves in the park, and contains some of the most interesting passages. Laurel Cave is open to the public during regular business hours in the summer months only (Memorial Day - Labor Day). All that is required is a permit available at the Welcome Center/Gift Shop. The permit gives you legal access to Laurel Cave (summer months only), Horn Hollow Caves and the connected Rimstone Cave. 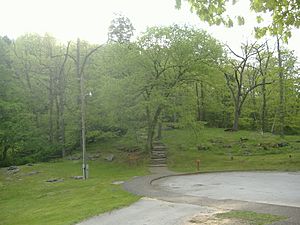 Trail leading to one of the many caves

Over thirty miles of hiking trails encounter seven natural bridges throughout the park. The Cascade Trail is a three-quarter mile trail passing through Box Canyon. The Three Bridges Trail winds three and a quarter miles and includes the park's largest natural bridge, the Smokey Bridge, which stands an impressive 90 feet (27 m) high and 120 feet (37 m) wide. This trail also passes by Fern Bridge and Raven Bridge as it meanders through the park. The half-mile Natural Bridge Trail passes beneath a third natural bridge, the only one in Kentucky that is paved and supports traffic. Longer trails include the 7.2-mile (11.6 km) Carter Caves Cross Country Trail (The 4Cs Trail) and the ten-mile (16 km) Kiser Hollow multi-access trail, which parallels the 4Cs trail for a couple of miles before encircling the outer boundaries of the park's property.

Smokey Valley Lake is a 45-acre (180,000 m2) lake within the park. Anglers will find populations of largemouth bass, bluegill, catfish, and crappie in the lake. The boat is accessible by ramp, but no gasoline motors are permitted.

The cave system houses a variety of organisms including:

All content from Kiddle encyclopedia articles (including the article images and facts) can be freely used under Attribution-ShareAlike license, unless stated otherwise. Cite this article:
Carter Caves State Resort Park Facts for Kids. Kiddle Encyclopedia.