Morehead is a home rule-class city located along US 60 (the historic Midland Trail) and Interstate 64 in Rowan County, Kentucky, in the United States. It is the seat of its county. The population was 6,845 at the time of the 2010 U.S. census.

It was the focal point of the Rowan County War and is the home of Morehead State University. 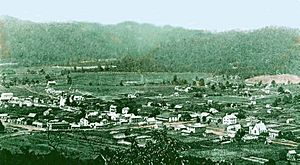 The first settlers came to Rowan County from Virginia following the end of the American Revolutionary War in 1783. In 1854, Morehead became the third community to be settled in the county. Colonel John Hargis founded the city after purchasing land in the area. The city was named after James T Morehead, a politician who served as governor of Kentucky from 1834 to 1836. Rowan County came into existence in May 1856, seceding from parts of Morgan County and Fleming County. It was divided into four districts with Morehead being declared the county seat. The formation of Rowan County was a political ploy to prevent Flemingsburg from moving its seat to Poplar Plains, and Morehead was selected as Rowan's seat because of its centrality. Although it was smaller and less developed than the neighboring town of Farmers, it remained a significant city in the county due its status as county seat. It was officially incorporated in 1869.

In the 1880s, Morehead became the central stage for a notorious conflict known as the Rowan County War or the Martin–Tolliver–Logan Feud. During a number of skirmishes for the next few years, at least 20 people were killed and possibly 100 were wounded. Beginning with an election-day barroom brawl, several gunfights took place in Morehead and the surrounding countryside. Eventually, a group led by Craig Tolliver seized political control of the town and installed allies in the county sheriff's and county attorney's offices as well as at the office of the town marshal. Several members of the opposing faction were arrested on trumped-up charges, and some were killed when the faction in power falsely claimed they had resisted arrest. The conflict gained national attention and on two occasions the governor sent troops to maintain order with little effect. Eventually a posse of as many as 100 individuals were organized and armed by Daniel Boone Logan with the tacit consent of Gov. J. Proctor Knott and Governor-elect Simon Buckner. In a dramatic two-hour gun battle through the center of Morehead, several Tollivers (including Craig) were killed and the Tollivers' control of the county was broken. Two men were later acquitted for the murder of Craig Tolliver. Morehead State University was established as an indirect result of the feud. After the state militia came to settle the feud, the Disciples of Christ established a church and school which served as the forerunner to the university.

Members of the Primitive Baptist Church in Morehead attending a creek baptizing by submersion, 1940. Photo by Marion Post Wolcott.

The industry improved in the early 20th century. It was considered an important shipping center in the region, and the city of Chesapeake, Ohio even carried out developments on the road system of Morehead. Its abundance of lumber, fire clay, farm products and gas made it an active center of industry, of which was mainly oriented towards agriculture. The close proximity of the Licking River helped ensure the population would flourish. In the 1920s, the city refocused its efforts towards fire clay extraction amidst the dwindling prices of timber. One of the first transcontinental auto trails in the USA, the Midland Trail, was connected to Morehead in 1929.

In July 1939, a number of business and hotels located on Mainstreet were caught in a raging fire following Independence Day celebrations which went awry. Only 24 hours afterwards, the town was badly affected by flash flooding. At least 25 people died, and thousands had to receive vaccinations for Typhoid fever. The property costs incurred by the flooding were estimated at $1,000,000, while the damage inflicted on crops and farms caused an economic loss of about $500,000. 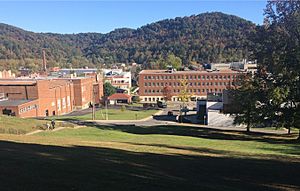 In the early 1960s, efforts were underway to establish a local hospital. An agreement was eventually reached with the Sisters of Notre Dame in Covington, Kentucky in which the sisters would assume responsibility for operating the proposed hospital. In July 1963, St Claire's Medical Center was opened with a 41-bed capacity. Transport in and out of the city was greatly improved in 1969 after the completion of Interstate 64 to the north.

After the logging and extraction industries lost momentum in eastern Kentucky during the mid-1900s, the city invested heavily in developing Morehead State University as a means to secure economic growth. Morehead also sought to capitalize on tourism by ameliorating its natural attractions. Hiking trails were created through Cave Run Lake in the 1960s and 1970s, and in 1974, tourism was further boosted when Cave Run Lake was impounded by the city. By 1990, Morehead State University had become the largest employer in the city.

In 2015, Kim Davis of Morehead gained international attention after she defied a federal court order requiring that as Clerk of Rowan County she issue a marriage license to a same-sex couple. 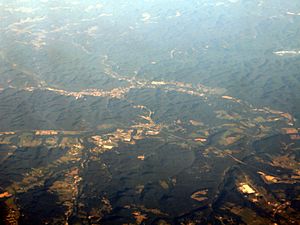 As of 2000, Rowan County was the home of 25 Evangelical churches, four Mainline Protestant churches, one Catholic Church and one Church of Jesus Christ of Latter-day Saints (LDS) congregation. This represents a net increase of five congregations. Six congregations (all Evangelical) were established between 1990 and 2000, while one (also an Evangelical congregation) closed.

Rowan County is ranked 113th (of 120 counties in Kentucky) in overall rates of adherence, with only 249 out of every 1000 residents claimed as an adherent of a religious congregation. 129 of every 1000 residents was claimed by an Evangelical congregation (116th in rank), 50 by a Mainline congregation (91st in rank), 20 by the Catholic Church, and 37 by the Church of Jesus Christ of Latter-Day Saints. A small number of other residents belonged to religious groups not represented in one of these categories.

Morehead is in the foothills of the Appalachian Mountains. The topography of the area represents a mixture of the Highland Rim and the western border of the Eastern Kentucky Coalfield. The highest elevation in the county is Limestone Knob (1435 ft), situated approximately 3 miles southwest of Morehead. The elevation of the city is 748 ft.

There were 2,114 households out of which 23.6% had children under the age of 18 living with them, 38.2% were married couples living together, 11.2% had a female householder with no husband present, and 47.9% were non-families. 36.1% of all households were made up of individuals and 13.3% had someone living alone who was 65 years of age or older. The average household size was 2.14 and the average family size was 2.81.

In 1974, tourism was boosted by the impoundment of Cave Run Lake, the largest lake in Eastern Kentucky. A council, called Morehead-Rowan County Economic Development Council, was formed in 1991 in order to attract more industry and capitalize on tourism to Cave Run Lake. Hiking trails dating back to the 1960s and 1970s are still maintained for foot traffic around Cave Run Lake, however, officials are attempting to address the difficulties faced by cyclists and horseback riders crossing the trails.

In 2012, Morehead became a trail town, rerouting the Sheltowee Trace Trail through it. This gives trail users the ability to explore the town and get what they may need before heading back on the trail.

There are more than thirty cycling trails in the county's section of Daniel Boone National Forest.

Morehead has city partnerships with the following cities or regions:

Through Sister Cities International, Morehead has one sister city:

All content from Kiddle encyclopedia articles (including the article images and facts) can be freely used under Attribution-ShareAlike license, unless stated otherwise. Cite this article:
Morehead, Kentucky Facts for Kids. Kiddle Encyclopedia.