Kids Encyclopedia Facts
For other plants with a similar common name, see Yellowwood.

Cladrastis kentukea, the Kentucky yellowwood or American yellowwood (syn. C. lutea, C. tinctoria), is a species of Cladrastis native to the Southeastern United States, with a restricted range from western North Carolina west to eastern Oklahoma, and from southern Missouri and Indiana south to central Alabama. Also the tree is sometimes called Virgilia. 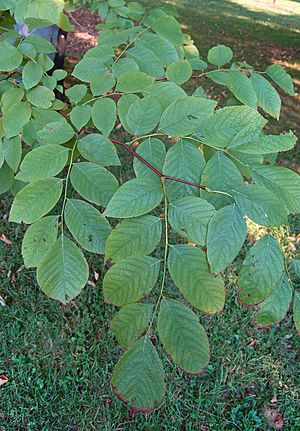 Cladrastis kentukea is a small to medium-sized deciduous tree typically growing 10–15 metres (33–49 ft) tall, exceptionally to 27 metres (89 ft) tall, with a broad, rounded crown and smooth gray bark. The leaves are compound pinnate, 20–30 cm long, with 5-11 (mostly 7-9) alternately arranged leaflets, each leaflet broad ovate with an acute apex, 6–13 cm long and 3–7 cm broad, with an entire margin and a thinly to densely hairy underside. In the fall, the leaves turn a mix of yellow, gold, and orange.

The flowers are fragrant, white, produced in Wisteria-like racemes 15–30 cm long. Flowering is in early summer (June in its native region), and is variable from year to year, with heavy flowering every second or third year. The fruit is a pod 5–8 cm long, containing 2-6 seeds.

One of the rarest trees of eastern North America. Found principally on the limestone cliffs of Kentucky, Tennessee and North Carolina, but it is hardy at the north to zone 4.

Plants from Alabama have the leaves more densely hairy underneath than those from further north, and are distinguished as Cladrastis kentukea f. tomentosa (Steyermark) Spongberg.

Cladrastis kentukea is widely grown as an ornamental tree for its attractive flowers, and is locally naturalized in many areas of the eastern United States outside of its restricted native range. It thrives in full sunlight and in well-drained soil, tolerates high pH soils as well as acid situations. The Yellowwood can withstand urban settings and is attractive to birds. A number of cultivars have been selected, including 'Perkin's Pink' (syn. 'Rosea', an invalid name) with pink flowers.

Kentucky yellowwood is recommended as one of the best medium-sized trees for cultivation as an ornamental plant in gardens. The only quality that is mentioned is a tendency of the trunk to divide very near the ground, as a multi-trunked tree. 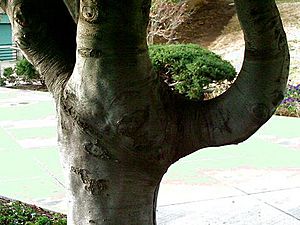 The name yellowwood derives from its yellow heartwood, used in small amounts for specialist furniture, gunstocks and decorative woodturning.

The Society of Municipal Arborists selected the yellowwood (Cladrastis kentukea or C. lutea) as its Urban Tree of the Year for 2015.

All content from Kiddle encyclopedia articles (including the article images and facts) can be freely used under Attribution-ShareAlike license, unless stated otherwise. Cite this article:
Kentucky yellowwood Facts for Kids. Kiddle Encyclopedia.