Beattyville is a home rule-class city in Lee County, Kentucky, in the United States. The city was formally established by the state assembly as Beatty in 1851 and incorporated in 1872. It was named for Samuel Beatty, a pioneer settler.

The climate in this area is characterized by hot, humid summers and generally mild to cool winters. According to the Köppen Climate Classification system, Beattyville has a humid subtropical climate, abbreviated "Cfa" on climate maps. 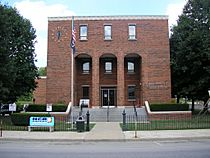 There were 509 households out of which 30.1% had children under the age of 18 living with them, 31.8% were married couples living together, 23.0% had a female householder with no husband present, and 42.2% were non-families. 39.7% of all households were made up of individuals and 18.7% had someone living alone who was 65 years of age or older. The average household size was 2.11 and the average family size was 2.82.

In 2010, Beattyville had the third-lowest median household income of all places in the United States with a population over 1,000. It was the poorest majority white town.

Since 1987, during the third weekend after the first Monday of October, the Main Street of Beattyville is closed to traffic for the annual Woolly Worm Festival. It operates for three days: Friday-"Opening Day", Saturday-"Parade Day", and Sunday "Closing Day" (which also features a large carshow).

The name "Woolly Worm" refers to the Woolly bear caterpillar. The official mascot, "Woolly the Woolly Worm," used as an image on some local merchandise and flyers. A round hay bale caricature of him stands beside the welcome sign to Beattyville.

During the festival, numerous musicians perform almost constantly on one of two stages, and dozens of booths offer a wide variety of merchandise, and delicious foods. Helicopter tours of Beattyville/Lee County are available. The "Woolly Worm Races" are won by coaxing one of these "Hairy Caterpillars" to the top of a string. The first one to reach the top wins, with the only rule being "No Touching"; there is usually a cash prize for the winner.

All content from Kiddle encyclopedia articles (including the article images and facts) can be freely used under Attribution-ShareAlike license, unless stated otherwise. Cite this article:
Beattyville, Kentucky Facts for Kids. Kiddle Encyclopedia.