Richmond is a home rule-class city in and the county seat of Madison County, Kentucky, United States. It is named after Richmond, Virginia, and is the home of Eastern Kentucky University. The population was 33,533 in 2015. Richmond is the third-largest city in the Bluegrass region (after Louisville and Lexington) and the state's sixth-largest city. Richmond serves as the center for work and shopping for south-central Kentucky. Richmond is the principal city of the Richmond–Berea Micropolitan Statistical Area, which includes all of Madison and Rockcastle counties.

The City of Richmond was founded in 1798 by Colonel John Miller from Virginia, a British American who had served with the rebels in the Revolutionary War. According to tradition, Miller was attracted to the area by the good spring water and friendly Native Americans. That year, the Kentucky legislature approved moving the county seat from Milford to land owned by Colonel Miller. The residents of Milford adamantly opposed the move, which led to a fist fight between Dave Kennedy (representing Milford) and William Kearly (representing Richmond). The county approved the move in March 1798. On July 4, 1798, the new town was named Richmond in honor of Miller's Virginia birthplace. Richmond was incorporated in 1809.

Kentucky was a border state during the Civil War and stayed in the Union. On August 30, 1862, during the Civil War, the Union and Confederate Armies clashed in the Battle of Richmond. Troops under Confederate General Edmund Kirby Smith routed the soldiers of Union General William Nelson. Out of Nelson's 6,500 men, only 1,200 escaped; the rest were all captured. One historian called this battle "the nearest thing to a Cannae ever scored by any general, North or South, in the course of the whole war."

In 1906, Eastern Kentucky State Normal School was founded in Richmond to train teachers. There were eleven members of the first graduating class in 1909. By 1922 it had expanded its curriculum to a four-year program and was established as a college. It added graduate-degree programs in 1935. In recognition of its academic departments and research, in 1965 the institution was renamed as Eastern Kentucky University.

Richmond is situated among the foothills of the Appalachian Mountains. The Kentucky River comprises the northern border of Madison County.

The climate in this area is characterized by hot, humid summers and generally mild to cool winters. According to the Köppen Climate Classification system, Richmond has a humid subtropical climate, abbreviated "Cfa" on climate maps. Average Annual Rainfall is 45", which is spread fairly evenly throughout the year. Relative humidity % at Noon is in the upper 50%'s from April through October, and in the mid 70%'s at Noon November through February. The Average daily temperature is 36.6 Fahrenheit in January and 77.0 Fahrenheit in July. Maximum observed temperature on record is 108 Fahrenheit, and the minimum observed temperature is -24 Fahrenheit.<Geography of Kentucky, Dr. Joseph R. Schwendeman, Sr.>

There were 10,795 households out of which 24.4% had children under the age of 18 living with them, 35.2% were married couples living together, 12.8% had a female householder with no husband present, and 48.6% were non-families. 34.7% of all households were made up of individuals and 8.8% had someone living alone who was 65 years of age or older. The average household size was 2.14 and the average family size was 2.78.

The city has numerous parks, the most prominent being Lake Reba Recreational Complex. Paradise Cove, the city's aquatic center, is located in the complex, along with Adventure Falls Miniature Golf and Batting Cages, separate regulation sports fields for football, soccer, baseball and softball; a horse shoe pit, and a playground. 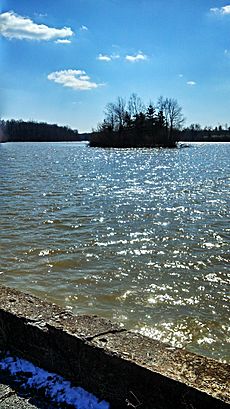 view of Lake Reba in Richmond, Kentucky from the fishing dock.

The downtown business district includes many Victorian-style structures including the Glyndon Hotel.

The majority of the city's high rises are located on the campus of Eastern Kentucky University (EKU), which include the 20-story Commonwealth Hall, the 16-story Keene Hall, the 13-story Telford Hall, and two 12-story buildings, Todd and Dupree halls.

The 2,000-seat EKU Center for the Arts was completed in 2011 on Lancaster Avenue.

All content from Kiddle encyclopedia articles (including the article images and facts) can be freely used under Attribution-ShareAlike license, unless stated otherwise. Cite this article:
Richmond, Kentucky Facts for Kids. Kiddle Encyclopedia.