Battle of Richmond facts for kids 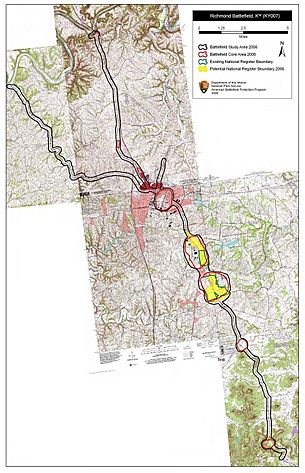 The Battle of Richmond, Kentucky, fought August 29–30, 1862, was one of the most complete Confederate victories in the war by Major General Edmund Kirby Smith against Union major general William "Bull" Nelson's forces, which were defending the town. It was the first major battle in the Kentucky Campaign. The battle took place on and around what is now the grounds of the Blue Grass Army Depot, outside Richmond, Kentucky.

In the fall of 1862, two Confederate armies moved on separate paths into Kentucky, hoping to restore the Confederate government of that state into power, threaten Union cities along the Ohio River, and recruit men to join the army. First to move was Kirby Smith, leading the Confederate Army of Kentucky, whose ideas provided the initiative for the offensive. General Braxton Bragg, commanding the Army of Mississippi, moved on a roughly parallel track to the west. Smith departed Knoxville on August 13, Bragg left Chattanooga on August 27.

At that time, Brigadier General Mahlon D. Manson, who commanded Union forces in the area, commanded a brigade to march to Rogersville, toward the rebels. Fighting for the day stopped after pursuing Union forces briefly skirmished with Cleburne's men in the late afternoon. That night, Manson informed his superior, Bull Nelson, of his situation, and he ordered another brigade to be ready to march in support, when required.

Kirby Smith ordered Cleburne to attack in the morning and promised to hurry reinforcements (Brigadier General Thomas J. Churchill's division). Cleburne started early, marching north, passed through Kingston, dispersed Union skirmishers, and approached Manson's battle line near Zion Church. As the day progressed, additional troops joined both sides. Following an artillery duel, the battle began, and after a concerted Confederate attack on the Union right, the Union troops gave way. Retreating into Rogersville, they made another futile stand at their old bivouac.

By now, Smith and Nelson had arrived and taken command of their respective armies. Nelson rallied some troops in the cemetery outside Richmond, but they were routed.

Civil war historian Shelby Foote remarked that Smith "accomplished in Kentucky the nearest thing to a Cannae ever scored by any general, North or South, in the course of the whole war."

All content from Kiddle encyclopedia articles (including the article images and facts) can be freely used under Attribution-ShareAlike license, unless stated otherwise. Cite this article:
Battle of Richmond Facts for Kids. Kiddle Encyclopedia.