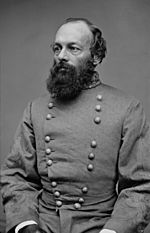 Edmund Kirby Smith (May 16, 1824 – March 28, 1893) was a United States Army officer and academic. He was a general for the Confederate States Army during the American Civil War. Near the end of the war, he commanded all the Confederate soldiers west of the Mississippi River. He surrendered his army (gave up the fight) on May 26, 1865 at New Orleans. This was weeks after Robert E. Lee had surrendered at Appomattox. Kirby Smith was from Saint Augustine, Florida.

All content from Kiddle encyclopedia articles (including the article images and facts) can be freely used under Attribution-ShareAlike license, unless stated otherwise. Cite this article:
Edmund Kirby Smith Facts for Kids. Kiddle Encyclopedia.