Yorktown is a town in Mount Pleasant Township, Delaware County, Indiana, United States. The population was 9,405 at the 2010 census. It is part of the Muncie, IN Metropolitan Statistical Area. 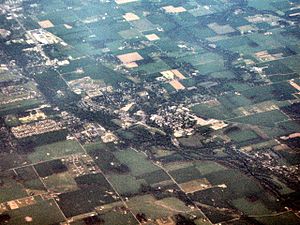 Yorktown from the air, looking east.

There were 3,648 households of which 34.6% had children under the age of 18 living with them, 59.9% were married couples living together, 10.9% had a female householder with no husband present, 3.9% had a male householder with no wife present, and 25.3% were non-families. 21.2% of all households were made up of individuals and 9.9% had someone living alone who was 65 years of age or older. The average household size was 2.55 and the average family size was 2.95.

There were 1,842 households out of which 37.5% had children under the age of 18 living with them, 61.5% were married couples living together, 10.2% had a female householder with no husband present, and 25.7% were non-families. 21.8% of all households were made up of individuals and 8.6% had someone living alone who was 65 years of age or older. The average household size was 2.53 and the average family size was 2.96.

During the Woodland period Native Americans built an earthen enclosure just to the east of Yorktown, still visible on Google Earth at 40°10′50″N 85°28′10″W﻿ / ﻿40.1805°N 85.4694°W﻿ / 40.1805; -85.4694. Yorktown lies at the junction of the White River and Buck Creek. According to local legend, the Miami Indians believed that the peculiar configuration of the junction made Yorktown immune from tornadoes.

Yorktown was platted in 1837 by Oliver H. Smith, who represented Indiana in the U.S. Senate from 1837 to 1843 and was a member of the Committee on Public Lands. Smith eventually became involved in the railroad business, and Yorktown was joined to Indianapolis by railroad in the early 1850s. Yorktown's main street bears Smith's name.

Yorktown benefited from the 1880s natural gas boom in the area, and was the site of several glass factories in the late nineteenth and early twentieth centuries. (The gas gave names to nearby the towns of Gaston and Gas City and drew the Ball Brothers to Muncie.)

In 1892, a developer platted "West Muncie" on land immediately adjacent to Yorktown (but roughly ten miles from Muncie.) Buck Creek was dammed to form "Lake Delaware," which became the focus of a 73-room resort hotel opened in 1893. However, the dam ruptured within a few years and the entire West Muncie project was abandoned. Its most enduring legacy was perhaps that Yorktown was erroneously labeled "West Muncie" on some road maps into the 1960s and perhaps later, puzzling most local residents, who had neither seen nor heard the name in any other context.

The town has been served by the Big Four Railroad and its successors: the New York Central, Penn Central, Conrail and CSX. The town was also served by an electric interurban line, the Union Traction Company of Indiana and its successor Indiana Railroad, in the early twentieth century.

In the mid twentieth century, many residents found employment in automotive plants in nearby Muncie and Anderson, most associated with General Motors. General Motors in Muncie, closed down in 2003. Borg Warner in Yorktown closed in 2009. Yorktown also served as corporate headquarters of the Marsh Supermarkets chain from 1952 until 1991, a fact reflected in the chain's "Yorktown" store brand. Marsh Supermarkets and Village Pantry headquarters are now located in Indianapolis.

All content from Kiddle encyclopedia articles (including the article images and facts) can be freely used under Attribution-ShareAlike license, unless stated otherwise. Cite this article:
Yorktown, Indiana Facts for Kids. Kiddle Encyclopedia.