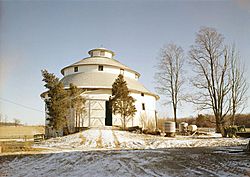 A round barn in Fayette County

Fayette County is one of 92 counties in U.S. state of Indiana located in the east central portion of the state. As of 2010, the population was 24,277. Most of the county is rural; land use is farms, pasture and unincorporated woodland. The county seat and only incorporated town is Connersville, which holds a majority of the county's population.

The county was historically significant early in the 19th century as a conduit for settlement of the Northwest Territory, and again in the early 20th century as an automotive manufacturing center, but has been in economic decline since the 1960s and is now among the poorest counties in the state. Most employment is retail, schools and healthcare.

The county lacks a commercial airport and bus service, and has no major (U.S. or Interstate) highways.

The county was created in 1818 from portions of Wayne and Franklin counties and unincorporated ("New Purchase") territory.

At the organization of the Indiana Territory from the Northwest Territory in 1800, present day Indiana was divided between Knox county (seat Vincinnes) in the south, and Wayne county including northern Ohio (seat Detroit) north of Fort Wayne in the north. By the Ohio Enabling Act of 1802 settlers in the Whitewater valley became citizens of Indiana Territory and residents of Clark county, which had been organized from the eastern part of Knox in 1801, with the county seat at Falls of the Ohio, later called Clarksville.

On Sept. 30, 1809, the United States, on behalf of the Northwest Territory and Governor William Henry Harrison, concluded the Treaty of Fort Wayne, part of whose terms included the purchase from the Indians of a strip of land locally called "The 12 Mile Purchase" enclosing the White Water Valley and comprising the largest portion of the future county. Conclusion of the Treaty essentially ended Indian occupation of the county and cleared the way for settlement.

In the territory of Indiana, Wayne and Franklin counties were carved from Dearborn (est. 1803) and Clark counties in 1811. At that time much of southeastern Indiana was divided between the two latter counties.

Fayette County was created by act of the Indiana General Assembly in Dec. 1818 from portions of Wayne and Franklin counties and unincorporated ("New Purchase") territory in the northern portion of the county. It was named for the Marquis de la Fayette, a French hero of the Revolutionary War. Connersville, then a small village of less than a hundred inhabitants, was designated the county seat. The county was divided into 5 townships (Harrison, Connersville, Jennings, Columbia and Brownsville) in Feb. 1819, "Connersville" containing the namesake town. In 1821, the organization of Waterloo Township subsumed the portion of Brownsville Township remaining in Fayette County, along with a portion of Harrison Township west of the Whitewater River.

The far eastern part of Fayette lying between the Treaty of Greenville treaty line of 1795 and the present eastern boundary line of Waterloo and Jennings townships remained a part of Fayette county until it was split off into the newly created Union county in 1821. In 1826, a small part in the southeastern portion of Jackson township not included in the limits of the county in 1818, being left a part of Franklin county was attached to Fayette County.

In 1841, Connersville became the first, and remains the only, incorporated town (chartered as a city in 1869) in the county.

The county and its seat Connersville rose from unincorporated territory surrounding an isolated trading post on the Whitewater River to the principal conduit for settlement of northern and central Indiana, Michigan, Wisconsin and Illinois during the early 19th century, to an automotive manufacturing powerhouse in the first half of the 20th century, before declining to one of the poorest counties in Indiana and the central midwest. After early settlement, during industrial growth, the county's population concentrated in the town of Connersville.

At the time of its organization in 1819, the county had approximately 3000 residents.

Economic Decline: Labor and Industry in the 1980's

According to the 2010 census, the county has a total area of 215.16 square miles (557.3 km2), of which 215.01 square miles (556.9 km2) (or 99.93%) is land and 0.15 square miles (0.39 km2) (or 0.07%) is water. The county is located in the northern portion of the Whitewater River Valley running south and southeasterly from Wayne County to Cincinnati on the Ohio River. The only major waterway in the county is the West Fork of the Whitewater River running north to south through the center of the county. There is only a single tiny lake in the county, Manlove's lake in Posey Township. The county is mostly flat with low, rolling hills. The county (and all of Indiana) is part of the Eastern (U.S.) Broadleaf Forest biome dominated by deciduous trees including over 175 native species of oak. Most of the land use is farms (>80%), vacant woodland and pasture. The most common crops are corn and soybeans.

Whitewater River, the only significant waterway in the county, is not commercially navigable.

In 2010, the county ranked 92nd out of 92 Indiana counties in median household income. Most of the economic activity is local manufacturing, retail trade and healthcare services, concentrated in Connersville.

All content from Kiddle encyclopedia articles (including the article images and facts) can be freely used under Attribution-ShareAlike license, unless stated otherwise. Cite this article:
Fayette County, Indiana Facts for Kids. Kiddle Encyclopedia.