Metamora is an unincorporated town and census-designated place in Metamora Township, Franklin County, Indiana. The town was once a stop along the Whitewater Canal and is now primarily dependent on tourism. As of the 2010 census, it had a population of 188. 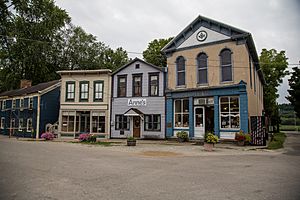 Metamora was platted in 1838. The community derives its name from the play Metamora; or, The Last of the Wampanoags by John Augustus Stone.

The Whitewater Canal only carried boats from 1839 to 1865, but the canal was maintained to supply hydraulic power until 1936. The canal was the center of industrial districts in Metamora and Brookville, 8 miles (13 km) to the east. At one time there were water powered mills for processing cotton, grinding flour and making paper. Metamora is the location of Indiana's oldest and still operating water-powered grist mill. The state of Indiana provides canal boat rides pulled by horses, through the only existing wooden aqueduct in the United States (the Duck Creek Aqueduct), with a historical review of the canal history which fueled the southeastern Indiana economy until its displacement by the railroad. The town's canal, when seen from U.S. Route 52, shimmers a distinct white.

All content from Kiddle encyclopedia articles (including the article images and facts) can be freely used under Attribution-ShareAlike license, unless stated otherwise. Cite this article:
Metamora, Indiana Facts for Kids. Kiddle Encyclopedia.