Centerville is a town in Center Township, Wayne County, in the U.S. state of Indiana. The population was 2,552 at the 2010 census. 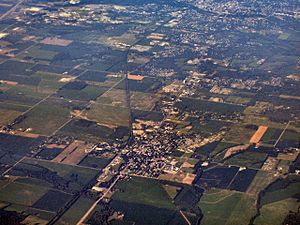 Centerville from the air, looking east toward Richmond

There were 1,038 households of which 37.8% had children under the age of 18 living with them, 49.6% were married couples living together, 17.1% had a female householder with no husband present, 4.4% had a male householder with no wife present, and 28.9% were non-families. 26.1% of all households were made up of individuals and 9.9% had someone living alone who was 65 years of age or older. The average household size was 2.46 and the average family size was 2.95.

There were 944 households out of which 36.7% had children under the age of 18 living with them, 52.8% were married couples living together, 15.6% had a female householder with no husband present, and 28.3% were non-families. 26.2% of all households were made up of individuals and 11.1% had someone living alone who was 65 years of age or older. The average household size was 2.46 and the average family size was 2.95.

Centerville was platted in 1814 on land that once belonged to the Miami Indians and was settled by Quakers from Carolina and Virginia. The community was named for its location near the middle of the county. A little-known county seat war was fought in Wayne County, Indiana, in 1873 between Centerville and Richmond. The county seat had been located in Centerville (Center Township) since 1818. By 1870, Richmond (Wayne Township) had surpassed Centerville in business, population, and tax revenue. These factors led the population of Wayne Township to demand the county seat be moved to Richmond. The dispute was played out in the newspapers, courts, and petitions with Richmond the eventual winner. A new courthouse was erected in Richmond and preparations were made to move records from Centerville to Richmond. Centerville stopped Richmond’s officials’ efforts to move the records twice. Once with locked gates with guards and the second by firing on their own courthouse with a three-pound cannon nicknamed “Black Betty.” The cannon was used when Richmond guards were brought in to protect the records. The cannon had been loaded with iron scraps. A crowd demanded the guard come out of the Centerville courthouse. When they refused, the cannon was fired, the door blown off its hinges, and the guards were forced to beat a hasty retreat.

Soldiers were brought in the next day to move the records to Richmond. Centerville’s tenure as county seat had come to an end.

The holes from the cannon shot are still visible over the door of the old courthouse, now the Center Township Library.

The Centerville post office has been in operation since 1818.

In 1828, the National Road, Main Street, was surveyed and later became the first improved section of the trail in 1850 by a Special Act of the U.S. Congress.

Centerville's cobblestone street was a major stop along the trail to the West. During the height of the Gold Rush, 49,000 wagons would travel along the street each year.

Centerville is known as the “City of Arches” due to the five main arches it has located on the Old National Road. The road used to be 100 feet wide, but was shortened to 65 feet due to the people of Centerville adding on to the front of the businesses and houses. The arches were used as a way to get behind the buildings and into the backyards of the houses. The five arches that are located in Centerville are the Backenstoes Archway, Dill Archway, Shortridge Archway, Lantz Archway, and Malone Archway. They were all built between 1823 and 1836. They are all located on National Road in Centerville. In August, Centerville has Archway Days, which is held in celebration and honor of the historical archways. They have food, games, and prizes, which attracts people from all over the state.

All content from Kiddle encyclopedia articles (including the article images and facts) can be freely used under Attribution-ShareAlike license, unless stated otherwise. Cite this article:
Centerville, Indiana Facts for Kids. Kiddle Encyclopedia.