May Aufderheide facts for kids

May Frances Aufderheide Kaufman (May 21, 1888 – September 1, 1972) was an American composer of ragtime music. She was probably the best known among female ragtime composers. She received training in art music and visited Europe on a grand tour, yet decided to compose in ragtime. 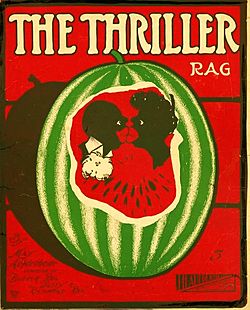 "The Thriller" was one of Aufderheide's most popular compositions.

She went on to compose and publish "Richmond Rag", "The Thriller", "Buzzer Rag," "Blue Ribbon Rag", "A Totally Different Rag," "Novelty Rag", and "Dusty Rag," plus a number of waltzes and other songs including "I'll Pledge My Heart To You," and a song version of "A Totally Different Rag" with lyrics by Earle C. Jones. Other songs include: "I Want A Patriotic Girl" with Bobby Jones, "I Want A Real Lovin' Man" with Paul Pratt, and "Dusty Rag" with J. Will Callahan.

She married Thomas M. Kaufman, son of architect William S. Kaufman in 1908, the year her first rag was published and moved to Richmond, Indiana where her husband was an architect in practice with his father. She stopped publishing early due to family difficulties with an alcoholic husband and a troubled adopted child. The family moved to California in 1947 where they lived in a home called "Rose Villa", designed by May's husband, on the grounds of the Huntington Sheraton Hotel in Pasadena. Though she spent the last several years of her life using a wheelchair due to debilitating arthritis, she outlived her husband and daughter, dying in Pasadena, California, aged 84. She is interred next to her husband in Mountain View Mausoleum in Altadena, California.

All content from Kiddle encyclopedia articles (including the article images and facts) can be freely used under Attribution-ShareAlike license, unless stated otherwise. Cite this article:
May Aufderheide Facts for Kids. Kiddle Encyclopedia.